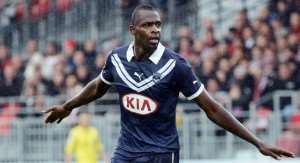 Pierre-Emerick Aubameyang never stop scoring, Papiss Cisse and Cheikh Diabate in stoppage time, the weekly round-up of the delivery of Africans in the five major championships.

France
In an advanced match Friday of the 28th day of League 1, Saint-Etienne faced Rennes. The opportunity for the Gabonese, Pierre-Emerick Aubameyang to increase his tally of goals. He is now 17 (record last season beat) and also issued an assist to his teammate, Yoann Mollo (his seventh of the season).

The Cameroon, Benjamin Moukandjo believed to lift Nancy on the way to a new heist against PSG. But it was without counting on Zlatan Ibrahimovic who scored twice. The Lorraine lose 2-1 and remain in the red zone.

This is the big flop of the day in League 1. The Togolese goalkeeper Kossi Agassa author of three blunders made Reims sinks to the bottom of the table. The reduction of the score by teammate Odair Fortes has not changed anything. Troyes dominates the Champagne also 4-2 with a goal by the Guinean, Mohammed Yattara.

Dual misclassified between Evian and Sochaux. These are the first who came out ahead of the game by dominating Doubistes 5-1. The Tunisian Saber Khlifa scored twice including a penalty. The Franco-Congolese Bakambu Cedric is the only Sochaux striker.

Special mention for the Franco-Cameroonian StÃ©phane Bahoken of Nice. In his first start in Ligue 1, he scored two goals in the victory over Montpellier.

Cheikh Diabate super sub with Bordeaux. The Malian off the chassis allowed the Girondins to take the best of Bastia.

England
This weekend was the Channel Cup but the championship was also held. Papiss Cisse of Senegal pulls three points for Newcastle in stoppage time (2-1) against Stoke City.

The Franco-Congolese Romelu Lukaku has West Bromwich Albion on the way to victory against Swansea with a purpose. Final score 2-1 to the Baggies.

Spain
Manucho in savior mode for Real Valladolid. The Angolans ripped the point (1-1) for his team against Malaga in the 27th day of Liga.

Italy
The Senegalese, Boukary Drame brand to earn a valuable 2-0 win over Chievo Verona of Naples. This is his first production of the season.

The Nigerian, Innocent Emeghara struck again this weekend. The Siena striker scored his fifth goal of the season when his team won 2-1 at Palermo.

Germany
The young Togolese German-born Peniel Mlapa scored his first goal in the Bundesliga this season. He has helped his club to snatch a 1-1 draw against Werder Bremen.

First goal also for Mathis Bolly , the Norwegian defender of Ivorian origin during the 3-2 defeat of Fortuna DÃ¼sseldorf against Bayern Munich.

The Congolese, Cedric Makiadi also scored this weekend but in the wrong direction. He scored a goal against his camp and participated in the 5-2 defeat of Freiburg against Wolfsburg.

Belgium
Goals galore in the African-Gent Genk match (3-2). The Ghanaian, Bernard Kumordzi scored for Genk while the Congolese, Mboyo also appeared on the score-sheet of Ghent.

The Netherlands, another goal for the Ivorian, Wilfried Bony who consolidates his leading position in the Eredivisie scoring charts. His only goal allowed Vitesse Arnheim to beat Twente.

What Will The Publication Of 260-Page Cocoa Road Audit Repor...
2 minutes ago