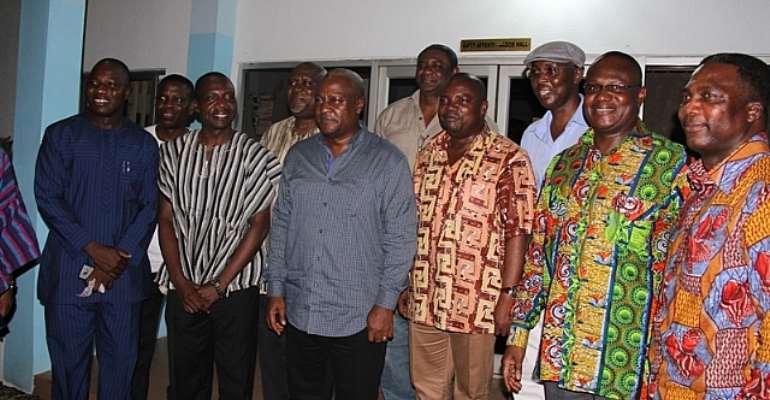 He said with his back-ground in the field of communication, he appreciated the importance of the media, in the country's development.

President Mahama said this when he made a surprise appearance at a press soiree in Accra.

The event was to afford a cross section of the media to interact with Mr Mahama Ayariga, Minister of Information and Media Relations.

The President said although the task of ensuring national development was quite an enormous one, it could be done if the right measures were taken.

He said it was very important that the media was well informed on every vital issue, in order to give the right picture of the situation on the ground.

President Mahama said although there could be difficult times ahead, "we hope for a good partnership with the media, in pursuit of the national agenda"

Mr Ayariga said he would reach out much more frequently to the media and pursue an open door policy that would encourage free flow of credible information saying "I hope this would promote greater understanding between the media and my ministry and ensure that we work together as partners."

He said it was quite impressive to note that Ghana ranked 30th on the world press freedom index, "ahead of even developed democracies such as the U.S and France".

Mr Ayariga said "we all need to pat ourselves on the back on this achievement and work hard to make it even better" adding "we urge media practitioners to place great premium on responsibility and truth to the people."

He said the country's democracy required "that we keep the people united and also uphold our core values of peace, freedom, justice and national cohesion".

Mr Ayariga reiterated his commitment to media freedom saying, "my motto will remain more education and no sanctions."

He urged media practitioners to always ensure that they lived up to their duty to the people by reporting on only the truth.

The Minister said the issue of the Media Development Fund remained high on the government's agenda and "through collaboration with the National Media Commission and other stake-holders, we hope to formulate policies on how to operate such a fund".