Niger's Ghanaian-born Kofi Dankwa in dilemma ahead of AFCON 2013 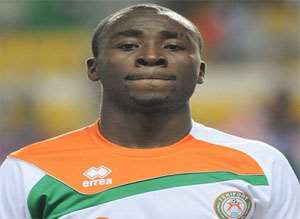 Ghanaian footballer Kofi Dankwa says he is in a tight corner after being named in Niger's squad for the 2013 Africa Cup of Nations where they face Ghana in Group B.

Dankwa was born in Dansoman, Accra 23 years ago to Ghanaian parents and schooled at Pope Johns Senior High School in the Eastern Region of Ghana but his ambition to play football abroad saw him naturalize for Niger.

Kofi Dankwa scored the goal which qualified the Mena to their first ever Africa Cup of Nations appearance in Gabon and Equatorial Guinea this year. He was given a brand 4-wheel drive as a present from the Niger president for that historic feat.

The former Stay Cool player played two matches at the tournament as they bowed out failing to win a single match.

Speaking to Joy Sports from his base in Tunisia, the central defender said he felt like a traitor ahead of that emotive clash against the Black Stars on January 28.

“It is not all that comfortable for me but I have to respect my motherland and also respect Niger. It is difficult but is my work so I have to be committed to whatever I'm doing,” Dankwa said.

“Asamoah Gyan even called me two days ago and told me to prepare very well. It will be difficult playing the Black Stars but I trust everything will go well.”

Niger are drawn in Group B along with Mali, Ghana and DR Congo and will be based at Port Elizabeth.