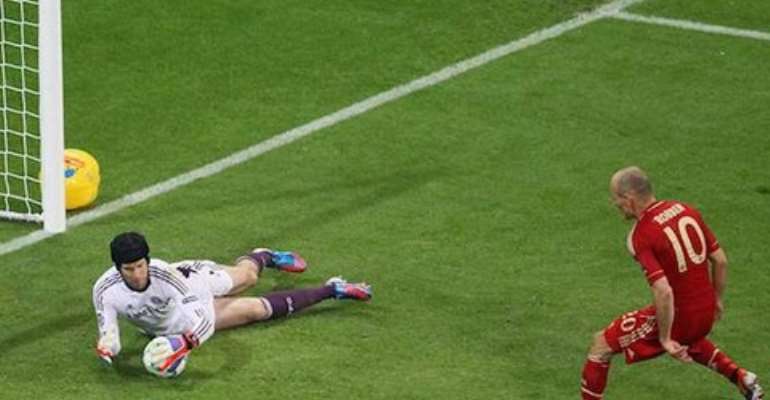 Arjen Robben in that penalty miss

An unnamed member of the Netherlands squad has claimed that he and his team-mates were happy when Arjen Robben missed a decisive penalty in the Champions League final.

With Bayern Munich's match with Chelsea locked at 1-1 in extra-time, the Dutchman stepped up to take a spot kick, which Petr Cech managed to save, and the Londoners went on to claim the trophy after a shoot-out.

And Bert van Marwijk's squad had hoped that Robben's miss would make him less selfish once he linked up with Oranje for their Euro 2012 preparations.

"Imagine how he would have arrived in Netherlands [if he had scored]," a player who wished to remain anonymous told De Telegraaf.

"He would have been even more arrogant and never passed the ball to other team-mates."

When Van Marwijk's side arrived at the tournement, they endured a frustrating campaign, and were ultimately eliminated after the group stage amid reports of disharmony amongst the squad.

And the source went on to claim that that atmosphere within the Dutch camp was made worse after their coach allowed his players to drink in between games.

"Van Marwijk allowed the Dutch squad to have a bottle of alcohol during a game of cards after a match. That annoyed people internally. They saw that as a lack of discipline."