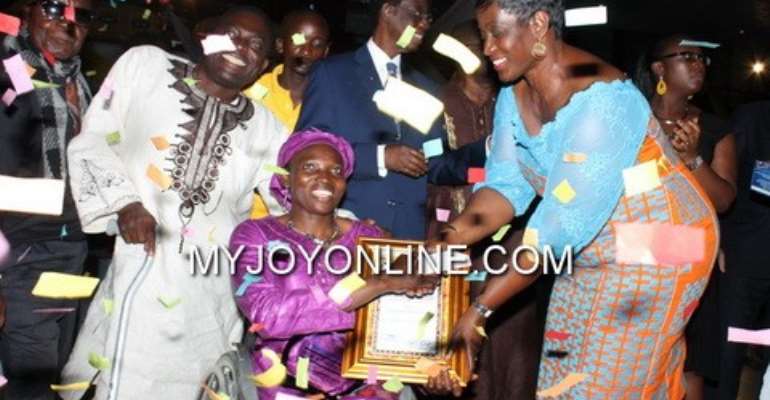 Ajara Mohammed was adjudged the Sports Personality of the Year

Ajara Mohammed has been crowned Sports Writers Association of Ghana (SWAG) Personality of the year 2011, but instead of rejoicing in her glory, the paralympic double gold medalist is crying for help because her hope for a London 2012 appearance hangs dangerously on a thread.

She told Myjoyonline.com shortly after she was decorated with SWAG's topmost award that it is most likely she will miss out on the Olympic Games because of lack of sponsorship.

According to her, she still has some qualifying time to make ahead of next month's Olympics, but money to train and take part in such qualifying campaigns has not been forthcoming.

She said several appeals to government and other stakeholders for support are yet to yield fruits.

Her coach, Emmanuel Sowah told Myjoyonline.com the situation is precarious.

“We need equipment, we don't have equipment. Now she needs a sponsor. Up to now she is supposed to be outside for two or more competitions before the Olympic Games but she is here,” he lamented

Ajara Mohammed picked two gold medals in the All Africa games in Maputo, 2011, to save the image of the Ghana Olympic team which was struggling for medals in the competition.

Her excellence and determination were enough to subdue Olympic Marseille's Andre Dede Ayew and New Edubiase's Emmanuel Baffuor to pick up SWAG's topmost award at a resplendent ceremony held, Saturday. She also picked up the Athlete of the Year, female, with Patrick Obeng picking the male category.


Dede Ayew picked up the Footballer of the Year Award for his outstanding role for Olympic Marseille which won him the Super Cup as well a quarter finals place in the Champions League and a decent outing at International level.

Emmanujavascript:openNewWindow('photo.php', 'PhotoGallery','900','700');el Baffuor took the Premiership footballer for the year as well as Top Scorer for the year.

The rest include, Association Chairman of the Year, Francis Adjetey-Sowah, Athletes of the Year, Male category Patrick Obeng.