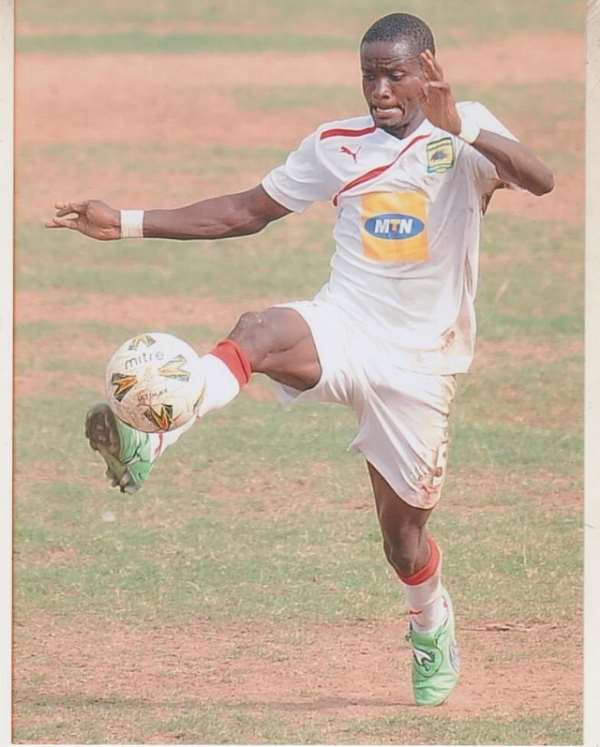 The midfield marshal who promised to deal with the phobian's a day to the kick off when he told www.lloydsplaza.com “I'm going to fight throughout the ninety minutes when given the opportunity to star in tomorrow's game. I know our cherished supporters are going to fill every corner of the stadium and we also have to make them proud by giving them what their heart desire for which is a win over the phobians”, passed the test with ease as his deft passes spluttered that of the phobians.

Michael Anaba's combination with Daniel Nii Adjei, Michael Akuffo and Fatau Dauda dwarfed that of the phobians (Laryea Kingston, Uriah Asante, Isaac Ofori and Samuel Nzemaba) as the Hearts midfielders kept chasing shadows for the greater part of the first half.

Coach Maxwell Konadu had his line-up right as his midfielders plucked the men in rainbow deep in the middle like the rainbow hanging up high in the sky.

Unlike the Hearts midfield which looked too lethargic to watch and lacking the basic football technique to creating scoring opportunities for their men upfront to test Abdoulaye Soulama in post for Kotoko, Coach Konadu's secret weapon (Anaba) and his partner in crime (Nii Adjei) keeps asking a lot of questions right from the beginning of the game and this put a lot of pressure on the phobians thus throwing the towel in the middle to Kotoko.

As the Porcupine Warriors kept pressing forward the distance between them and goal was not too far as former Liberty Professionals goal poacher Kofi Nti Boakye's header in the 36th minute gave Kotoko the lead.

Hearts woes deepened just two minutes from the recess when former Black Stars winger Laryea Kingston was sent off for a challenge on Kotoko's promising left fullback Baba Abdul Rahman which nearly marred the beauty of the game.

The second half which was not as grueling as the first half ended in a grand style with two beautiful strikes from both sides. First, Hearts of Oaks Mahatma Otoo who came in as a second half substitute blasted home a thunderbolt free kick from outside the box which flashed in the eyes of Soulama like the thunder light in the rainy season but Kotoko restored their lead within just a minute from Michael Akuffo's well taken 30 metre strike which caught Hearts' substitute goalie Sammy Adjei pants down.