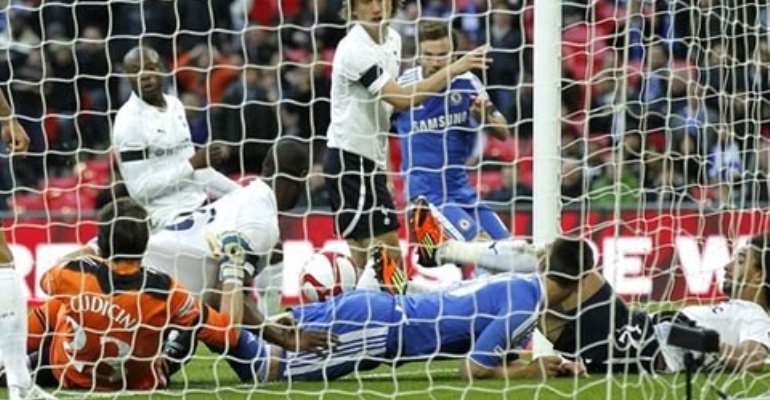 Chelsea thrashed Tottenham to set up an FA Cup final meeting with Liverpool - but the victory was accompanied by fierce controversy that renewed the debate over the need for goalline technology.

The scoreline reflects an emphatic win for Roberto di Matteo's side as they received the perfect lift before Wednesday's Champions League semi-final first leg against Barcelona at Stamford Bridge.

Spurs, however, were left complaining bitterly that they were the victims of an injustice that swung the destiny of this all-London confrontation decisively in Chelsea's favour when referee Martin Atkinson made a crucial intervention just after the interval.

The ball did not appear to cross the line, a view supported by television replays as Blues captain John Terry also joined the melee, but referee Atkinson awarded the goal - to the obvious anger of Spurs and their management team.

Harry Redknapp's players pleaded with the officials to reconsider, but their protests were in vain and Chelsea had taken a decisive hold on the game.

Gareth Bale gave his side hope with a goal shortly afterwards but the real damage was done and Chelsea reasserted their authority to finish easy winners with further goals from Ramires, Frank Lampard and Florent Malouda.

Chelsea will point to that victory margin as confirmation of their superiority - but Spurs will complain their hopes of turning the game around were damaged fatally by Atkinson's decision.

The referee seemed well placed to award the goal, but video evidence suggested the protests were well founded and the incident only strengthens the case of those lobbying for technology to assist officials.

Before kick-off, a section of Chelsea's support sadly let themselves and their club down by noisily interrupting the silence held in memory of the Hillsborough disaster and for Livorno midfielder Piermario Morosini, who collapsed and died after suffering a heart attack during a Serie B game on Saturday.

After early sparring, Spurs started to take control as the interval approached and twice came close to taking the lead. Terry blocked Rafael van der Vaart's header on the line and the same player saw his cross strike the post after Adebayor was unable to apply a touch.

So it was against the run of play that their London rivals took the lead two minutes before the interval through Drogba. He rolled William Gallas inside the area before flashing a stunning finish high past keeper Carlo Cudicini.

The second half was only four minutes old when the moment arrived that will leave Spurs and their supporters nursing wounds about this semi-final forever.

David Luiz and Terry challenged for headers and when the loose ball fell to Mata, his shot was blocked on the line by a bundle of bodies that included King, Assou-Ekotto and Terry. Referee Atkinson was swift to award the goal as Mata wheeled away in celebration - much to the disgust of the Spurs players.

Fuelled by their fury, Spurs surged forward and gave themselves hope after 56 minutes when Scott Parker's precise through-ball released Adebayor. He was pulled down in the area by Cech but referee Atkinson allowed play to continue for Bale to roll the ball into an empty net.

The goal also cost the Blues the services of Luiz, who was injured in attempting to clear and was taken off on a stretcher and replaced by Gary Cahill.

Tottenham pushed forward in an attempt to complete the recovery - but only succeeded in leaving themselves wide open to Chelsea's attacks and Redknapp's side ended in total disarray.

The Blues reopened their two-goal advantage with 13 minutes left when Mata found time and space to play in Ramires, who lifted a composed finish over Cudicini as the keeper came out.

All that remained was for the west Londoners to complete the formalities and they did so in style against a Spurs side thoroughly demoralised in the closing stages.

Lampard's spectacular free-kick from 30 yards left Cudicini helpless and, with Redknapp's men waiting to be put out of their misery, Malouda escaped the attentions of their defence to add a simple fifth to confirm that it is Chelsea who will be back at Wembley to face Liverpool on 5 May.