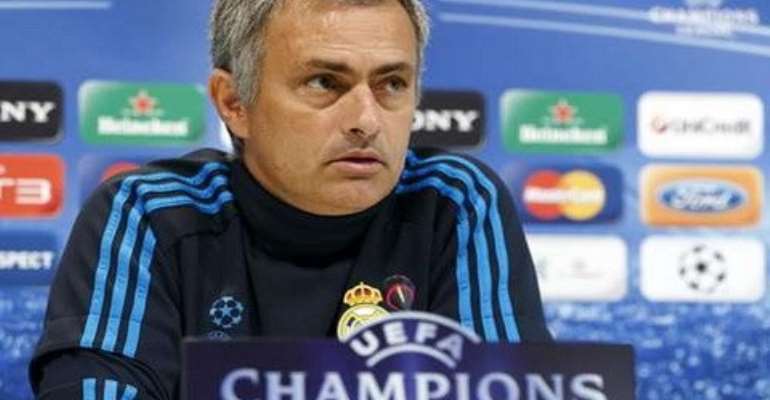 The Madrid boss, speaking after his side's 5-2 win over APOEL at the Santiago Bernabeu on Wednesday, claimed a meeting with his former side Chelsea at Munich in May is impossible.

When asked about the two semi-finals in a television interview in the tunnel straight after the final whistle, Mourinho told TeleMadrid: "For me the big question is knowing who will play against Barca in the final.

"It will be a great semi-final, Bayern against Real Madrid, and the best team will go on to play against Barca."

Mourinho then walked away from his interviewer, who quickly followed up by asking the Portuguese why he was so certain that Barcelona would be in the final.

"Because they are very good." the Blancos boss added, before abruptly ending the interview.

Barca will first face Chelsea in the last four of the competition later this month, in a semi-final tie identical to the one the Catalans won in Pep Guardiola's first season, 2008-09, en route to the trophy.

That tie was marked by refereeing controversies in the second match in London, with Mourinho later claiming he would be 'ashamed' to win in such circumstances, describing the game as 'the scandal of Stamford Bridge'.

Barca beat AC Milan 3-1 on Tuesday to advance to the last four, but there was more controversy in that match surrounding the award of a penalty to the Catalans for an Alessandro Nesta tug on Sergio Busquets when the ball was out of play.