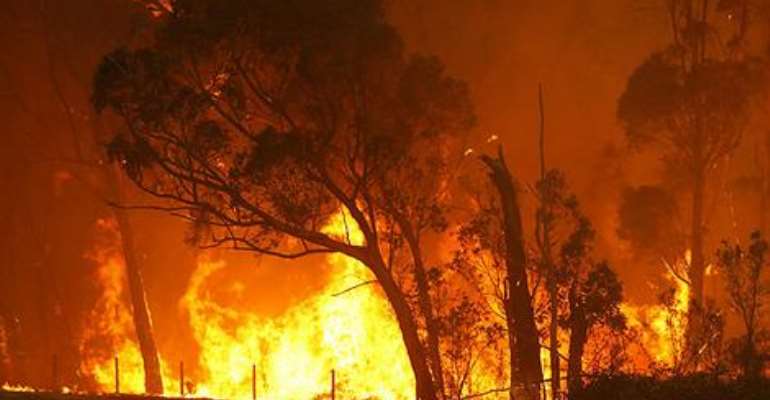 The cost of damage nationwide amounted to GH¢1,470,369.50 with eleven people losing their lives within the three months.

This was contained in the Chief Fire Officer's Easter Message which was signed by Assistant Divisional Officer II, Wilson Addo Korli in Accra.

It said the GNFS had noted with grave concern, the spate of fire and road accidents that occurred during Easter festivities and the unwitting damage to life and property and that of the 704 fire outbreaks domestic fires was the highest with 206 representing 36.93 per cent followed by bushfires, 153 representing 21.93 per cent.

"The Easter festive season is here with us once again and I wish all well meaning Ghanaians a joyous Easter adding that records have shown that during such occasions, fire outbreaks become rampant as a result of certain inactions and irresponsible attitudes of some people.

The statement said "During the Easter holidays, we may attend churches and conventions and in the process leave our television sets, pressing irons, radios, fans and other gadgets that are not meant to stay on when they are not in use. Carelessness and the euphoria behind the festive occasion may be a factor and these gadgets get over heated and could lead to fire outbreaks".

It said the recent power outages has also been recognised as a major cause of some domestic fires and requested the general public to remember to switch off all electrical appliances when there is power outage and unplug them.

The statement said if you live in a compound house with a common meter, be sure to put off the main switch during power outage, avoid overloading of sockets and it is advisable to replace all faulty and broken sockets.

It said never leave your heater unattended as it can be a source of a fire outbreak and if it becomes necessary to use a candle, place it in a bowl of water so that by the time it gets to a level of the water it will go off by itself.

Place mosquito coils in ceramic plates instead of the bare floor or on the carpet and ensure that if you should light a match stick, you blow it off before you drop it and contact qualified electricians to service your faulty electrical gadgets.

The statement said it is important to have your LPG gas checked to detect any defects before it causes accidental fire and you could smear soap water on the hoses that connect the stove to the cylinder to check any leakage by the notice of bubbles.

LPG cylinders should be kept outside and at a well ventilated place whilst when cooking, ensure that the oil in the pan does not extend beyond half the space in it, a spill-over may cause a fire outbreak.

In case of any accidental leakage of gas in the kitchen, open all windows and doors to ensure adequate ventilation.

To the travelling public, in a bid to reach out destinations faster or meet deadlines during the Easter, speeding is common on the roads.

It is important to avoid speeding, let us apply time management to meet deadlines rather than speeding.

Drunken-driving has also caused a lot of road accidents especially with the euphoria surrounding festive occasions like Easter, let's avoid it as it is prudent to live long to see the next Easter.

The statement urged the travelling public to avoid throwing lighted cigarette butts along the road when travelling as this attitude may result in disastrous consequences.

The GNFS appealed to Metropolitan, Municipal and District Assemblies to support fire volunteers who are the first liners of bushfire prevention to live up to their task.

The Chief Fire Officer advised the general public especially parents, to be mindful of the fact that most home fires were caused by electrical equipment which were switched on unattended.

"We should all make an effort to switch off all electrical gadgets and remove the plugs from their sockets once they are not in use and before we leave our homes. Let us all be extremely careful with how we handle fires especially during this Easter holidays."

The GNFS wish to extend the felicitations of the season to all Christians and assure the general public that it has in place contingency measures, to minimise and possibly deal with unforeseen emergencies that may occur within the period.

The public is therefore requested to contact any fire station or call GNFS in the event of any fire emergency on 192.