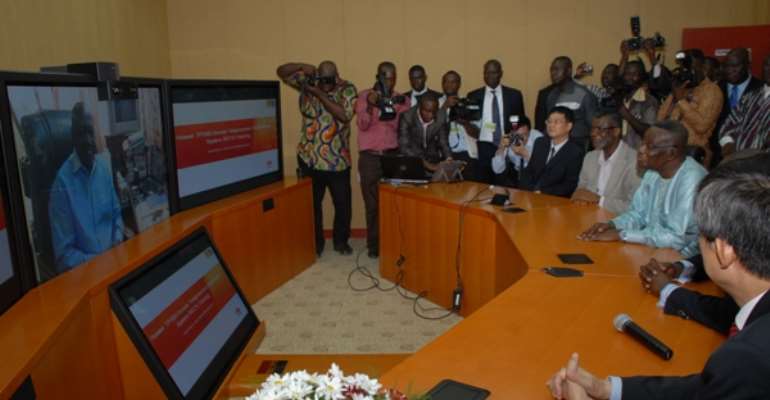 The system forms part of a three-million-dollar equipment, donated by Huawei Technologies Ghana SA, in different locations, in fulfilment of a pledge by the mother company, Huawei Technologies China, when President Mills went to China on a State visit in September 2010.

The system, provided at the request of President Mills, ensures an interactive encounter between the Presidency, Ministers of State and other State agencies.

There are two types: a TP 3006 Telepresence which is designed for three to six people installed at the President's Office, and the Flagstaff House, which comes with three 65-inch plasma display, with an all in one system with 1080p, 720p HD video, and a wireless 8.5 inch screen control panel; and TP 1002 Telepresence system which is available at six regional offices.

The second system is designed to accommodate one to two people and has an all in one system with 1080p, 70p 65 inches HD video. It has a wireless 8.5 inch screen control panel.

President Mills described the September 2010 State visit to China as a “spectacular event” and expressed appreciation to the Government and people of China for the donation.

“The Chinese have demonstrated their love and concern for this dear nation of ours, and have since demonstrated it in many ways that are going to inure to the benefit of Ghanaians. We thank the Government and people of China," President Mills said.

President Mills expressed appreciation to the Chinese Government and Huawei companies for their sacrifices on behalf of Ghanaians and assured the benefactor that the equipment would be well utilised.

He stressed enhanced relations between the two nations.

Mr Haruna Iddrisu, Communications Minister said the equipment and the services to be rendered were no illusion, and would help President Mills to communicate more effectively, and even monitor body language and voice tone of those with whom the President would be communicating.

He described the facility as a “diplomatic dividend” apart from the three billion Chinese development assistance for the development of infrastructure.

Mr Iddrisu commended Huawei Technologies for connecting 85 Metropolitan, Municipal and District Assemblies to the Internet to enhance the e-governance programme, adding that, other benefits that would accrue were decrease in travel cost and other incidents associated with travelling.

Mr Gong Jianzhong, Chinese Ambassador to Ghana, expressed the hope that the outdooring would ensure efficiency of the Government and impact positively on governance in Ghana.