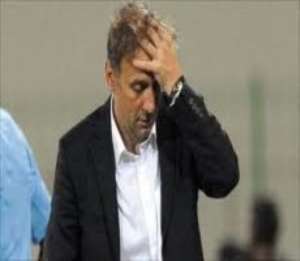 The Serb stormed out of a meeting with the Football Association on Monday morning "surprised.''

He has begun negotiations with his legal representative Angelo who jetted in at the weekend.

Stevanovic-who has one year left on his contract-is demanding his pound of flesh which could run into millions of dollars.

The 45-year-old confirmed he will no longer take charge of the team.

"I asked them if it is possible to stay and they said it is very difficult. Now we have started to negotiate," Stevanovic said.

"I am satisfied here and I want to stay but obviously it is very impossible."

Stevanovic leaves as Ghana coach with a 53 percent success rate in 17 competitive matches.