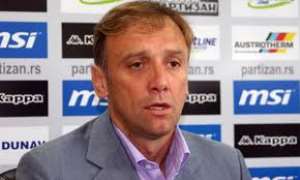 Accra, March 18, GNA - Sacked Ghana Coach, Goran Stevanovic is demanding final payment of 100,000.00 Euros of his entitlement fee owed him by the Ghana Football Association (GFA) after he was shown the door last Friday.

Stevanovic is demanding full payment of the 100,000.00 Euros owed him by the GFA who paid only half of the agreed entitlement fee of 200,000.00 Euros when the Serb was contracted in January 2011.

The GNA Sports can confirm that the GFA sacked the coach in a meeting last Friday began negotiations to pay-off the former Partizan Belgrade coach who has a year left on his contract.

The Coach according to a supreme source at the GFA could not reach an agreement with the GFA who seeks to pay less than the alleged 360,000.00 Euros as compensation for the remainder of his contract.

Though the Coach look set to cash in on the Association's decision to sack him, he is said to have demanded the presence of his lawyers before negotiations could continue, forcing the meeting to be pushed to Monday, March 19.

According to the information, though the Coach would seek to pluck what he deserves, he is also preoccupied with the 100,000.00 Euros in arrears.

If both parties are unable to reach an agreement in the Monday meeting, the available option would be to petition the Federation of the International Football Association (FIFA) as stated per the contract.

The Coach was supposed to receive 200,000 Euros as entitlement fee per the six-page contract and 30,000.00 Euros monthly salary, which is the net of taxes and all deductions.

The coach per article (6.1.2.4) of the contract with the GFA would have received twice what the players would have earned if he had won the trophy which would have pushed Ghana's haul to five.

The coach who according to the contract has a '40-day paid holidays in each year of his employment' with 'not more than 20 days' taken 'consecutively on any occasion without the written permission of the Association', has a year left on his contract.

The GFA last Friday for the first time exercised their powers as sole right holders of extending or terminating Stevanovic's contract since his appointment a year ago.

In article 9.1 of the two year contract, the GFA insisted that 'as stipulated at clause 2, herein the duration of this contract shall be for two years but the Association alone shall have the right to extend the contract after a period of two years but where the Association does not terminate the Coach's contract after the first two years, the Coach shall be entitled to a 25 percent increase in his monthly salary.'

The Coach promised to end Ghana's wait for a fifth Nations Cup glory when he was employed last year and has been under intense pressure after the Stars could only manage a fourth place finish at the tournament.