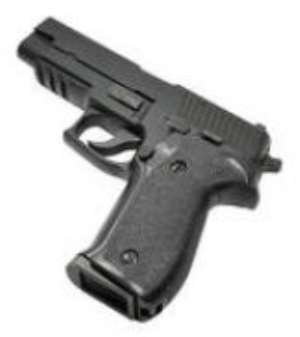 A man identified only as a technician has died from a stray bullet from the gun of a police man, following a scuffle between the cop, Lance Corporal Eric Amoako and two other men.

The man died instantly when the bullet hit his chest.

He was said to have been hired to work on a faulty fire extinguisher belonging to a private financial institution located in a storey building opposite the Kumasi Central Market, where the bullet hit him.

The body has since been deposited at the morgue of the Komfo Anokye Teaching Hospital.

The police are investigating the incident.
When this reporter got to the scene, there were traces of blood from the first floor of the storey building where the deceased was shot to the ground floor.

According to an eye witness, Rafael Payo, around 3 p.m. Tuesday, two passengers had a misunderstanding with a driver. As the verbal exchanges became heated, the driver attempted to seek refuge in a store on the ground floor of the building.

However, the two men caught up with him and punched him in the left eye, resulting in a fierce scuffle.

The eye-witness said this attracted Lance Corporal Amoako who was on duty at the Central Market branch of the Uni Bank to the scene.

He said the cop succeeded in bringing the situation under control and after listening to the two parties, arrested one of the two passengers.

According to Payo, the other man joined his arrested colleague in a struggle with the police man, ostensibly, to set him free, during which the two men also attempted to disarm the peace officer.

It was at this juncture that the police man's gun accidentally went off, the eye witness said.