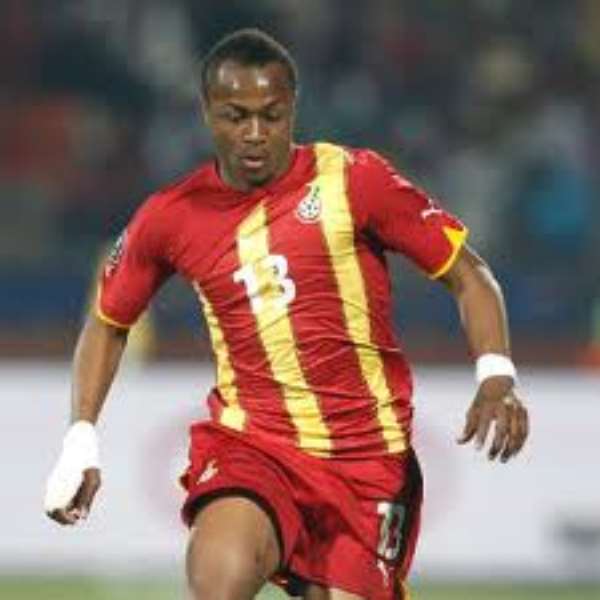 Franceville, Gabon, Feb. 6, GNA - Andre 'Dede' Ayew scored what was to define Ghana's fate at the Africa Cup of Nations in the Black Stars 2-1 victory over Tunisia in extra time at the quarter finals game on Sunday in Franceville.

Ghana, touted the tourney favourites went through a nervy game that saw captain John Mensah putting the team ahead in ten minute, before Tunisia equalised late in the first half to push the game beyond 90 minutes.

The Stars encountered their stiffest challenge yet in the Carthage Eagles whose patience proved the arch hills for the Ghanaians who went fighting from the blast of the whistle.

Both teams had barely settled when Ghana earned a corner, which was swung in by Emmanuel Agyeman Badu who eventually was awarded the 'Man of the Match'.

Advancing Mensah towered above his markers to head in for a lead that will throw the Stadium into ecstasy.

Tunisia responded well but had to wait for a while to have their efforts rewarded when Khalifa Sabeur profited from a scramble in Ghanaian's goal area to pull even just four minutes before the break.

Back from recess, both teams played for a winner without success with Ghana's goalkeeper Adam Kwarasey the busiest on the pitch.

Kwarasey was made to pull twice on the trot deep into the second half when he was pushed beyond his elastic limit to keep Ghana in the game.

With the scores at a goal each, the game had to travel to the extra time. Tunisia played comfortably, but out of nothing, a ball from the middle fell to Badu who sent a long one up-field.

Tunisia's keeper Ben Cherifia Moez struggled to make a first time save to what appeared to be a lame shot; however, an unmarked Andre Ayew was around to pounce on the ball and send Ghana ahead deep in 101th minute.

The celebration was spontaneous. Though Tunisia's Abdennour Aymen was giving the marching- off order for a foul on Ayew to give Ghana a numerical advantage, it was, however, the Carthage Lions who looked the stronger side till the game ended.