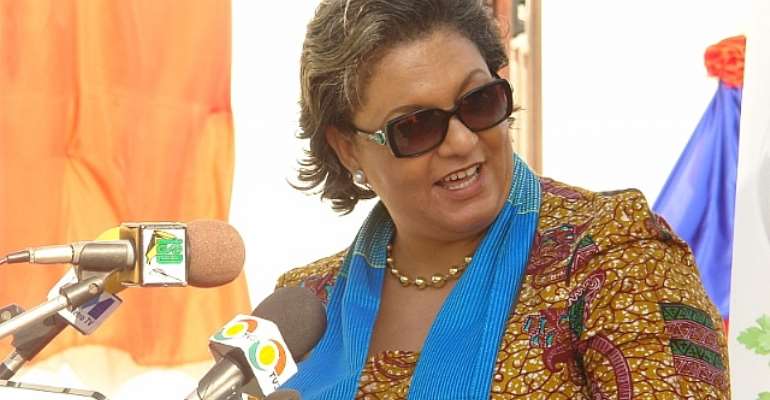 Mankessim (C/R), Dec. 21, GNA - Ms Hannah Tetteh, Minister of Trade and Industry, on Tuesday asked all Metropolitan, Municipal and District Assemblies (MMDAs) in the country to establish the Rural Enterprises Programme (REP), to alleviate the plight of the rural poor.

She explained that the programme, established in 1995, formed part of Government's efforts to reduce poverty and improve upon the living conditions of people in the rural areas.

Ms Tetteh made the call at the launch of the third phase of the REP at Mankessim in the Central Region.

The occasion was also used to inaugurate a rural technology facility and a five-day trade exhibition of which assorted soaps, tie and dye cloths, palm oil, sandals, gari, palm kernel processing machines, and gas cookers were displayed by beneficiaries of the programme.

Ms Tetteh said the first and second phases of the REP had played significant roles in the development of the beneficiary districts.

She said the Ministry would establish a Department of Technological Industries at the districts to promote light industrial concept as well as enhance capacity building and competitiveness among Small and Medium Scale Enterprises (SMSEs).

Ms Tetteh said the REP was a demand-driven initiative and interested MMDAs would be expected to provide offices and personnel, who would be paid by the assemblies, and the remaining facilities needed to sustain the project would be provided by the Government.

She said about 600,000 rural poor-micro and small- scale entrepreneurs nationwide were expected to receive support under the REP, from 2012 to 2020.

He said the REP was expected to create at least 100,000 jobs, establish 36,000 new businesses and strengthen 70,000 existing businesses in all MMDAs in the country.

Mr Attah-Antwi said the programme would provide business development services to MSSEs , transfer technical skills, disseminate technologies and give financial support to MSSEs for the development of pro-poor institutions and policies

Mrs Ama Benyiwa-Doe, Central Regional Minister, said poverty in the country could be reduced if the unemployed were given the requisite skills to make them self-reliant.

She stressed that MSSEs were viable instruments for economic development and poverty alleviation.

Mrs Benyiwa-Doe said the surest way to create wealth was for people to be empowered with skills and knowledge so that they could become productive and economically independent.

She appealed to the youth to take advantage of the REP and go into self-initiated businesses, and said “this will contribute to the spatial development of the country and tone down the incidence of rural-urban migration.”

Osagyfo Amanfo-Adu , Omanhen of Mankessim, commended the Government and donor partners for establishing the rural technology facility in the area to create jobs for the youth.

He appealed to the Government to woo investors to revamp the Mankessim irrigation project to enhance the production of vegetables.

Osagyfo Amanfo-Adu asked Ghanaians to patronize goods produced by beneficiaries of the REP to sustain the programme.

In all 38 individuals, who were trained in hairdressing, dressmaking, leatherworks, radio mechanics, motor vehicle mechanics, gas electricians, and vulcanisers, were presented with start-up kits to commence businesses.