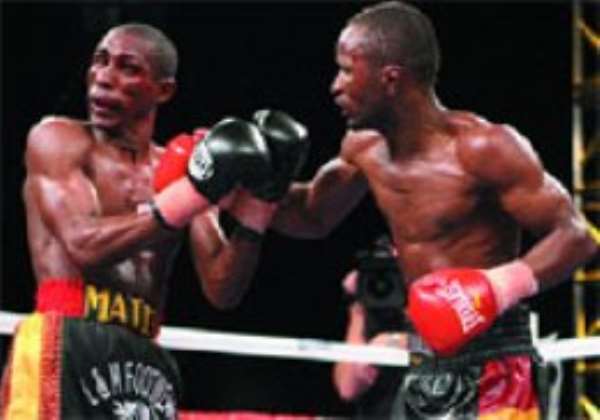 A head butt may have cost Joseph Agbeko his world title a little more than a year ago.

A stellar fight plan and some lightning-quick punches won it back.

Agbeko reclaimed the International Boxing Federation world bantamweight title with a 12-round unanimous decision over Yonnhy Perez at the Emerald Queen Casino in Tacoma on Saturday night.

Agbeko (28-2, 22 KOs) advances to the finals of The World Bantamweight Tournament: Winner Takes All – a two-stage, single-elimination tournament of 118-pounders.

Agbeko will meet undefeated Abner Mares, who defeated hard-hitting Vic Darchinyan by split decision in the other semifinal bout.

Agbeko and Mares will fight next year, with site and date to be determined.

Agbeko lost to Perez on October 31, 2009, after a controversial head butt in the 10th round was credited as a knockdown for Perez.

Perez would go on to win the title with a thrilling 12-round decision.

The rematch wasn’t as close as Agbeko landed punches seemingly at will and appeared to be the faster, stronger fighter.

Outside of an exciting fifth round, when each fighter took turns tagging the other constantly throughout the three minutes, Agbeko was in complete control during much of the 12 rounds.

In the other semifinal, Mares, of Mexico, defeated Darchinyan to capture the World Boxing Council silver and International Boxing Organization crowns.

Judges Glen Hamada and Alan Krebs scored the fight 115-111 and 113-112, respectively, in favour of Mares, while Tom McDonough had Darchinyan winning the contest, 115-111.

Darchinyan controlled the early rounds, opening up a nasty cut two inches above Mares’ left eye midway through the first round and flooring his opponent with a quick left in the second.

After Mares lost a point in the fourth round due to a low blow, Darchinyan appeared to become less active in the ring with Mares dictating the fight’s pace from the fifth round on, chasing a retreating Darchinyan.

When Mares finally caught Darchinyan he was able to find success going to the body, which eventually led to a seventh-round knockdown — which proved to be the difference.

Darchinyan, a world champion in three weight divisions who won the IBF super flyweight title at the Emerald Queen in 2008, fell to 35-3-1 with the defeat, losing for the first time since dropping a 12-round decision to Agbeko on July 11, 2009, in a bout for Agbeko’s IBF batamweight title. — newstribune.com