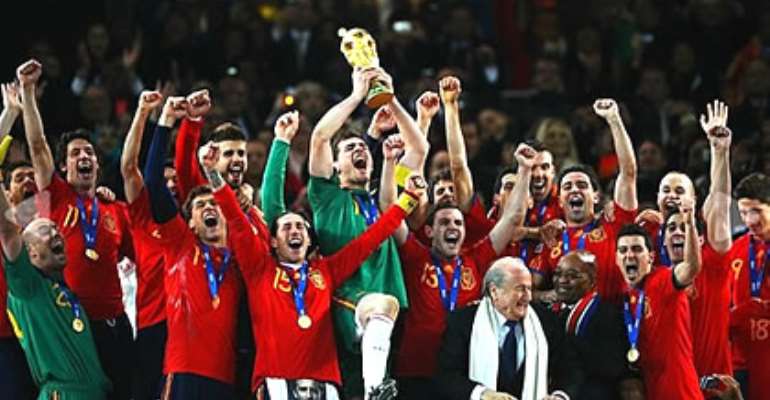 A well struck screamer by Iniesta ensured that Spain wipe off the tag of perennial under achievers to win their first ever World Cup, beating a plucky Netherlands side in extra time.

It was expected to be a flamboyant final; it wasn't.

But it was a tale of near misses. Arjen Robben on two occasions fluffed a golden opportunity; opportunities he would rue.

David Villa and substitute Cesc Fabregas also had their fair share of glorious opportunities which they shockingly fluffed.

And just when the game was heading to the lotteries- penalty kick, Iniesta popped up in the 116th minute with an exquisite strike sending the stadium to raptures and somehow making Paul the Octopus the greatest predictor.

It was a game replete with controversies and surely not card shy.

Tempers flared, tackles flew in from both sides with the players tumbling over each other for most part of the game.

Referee Howard Webb dished out 12 yellow cards; five to Spain and seven to the Netherlands with one red card.

The Dutch set out to frustrate the fluid attacking repertoire of the Spaniards with hard tackles and they did it so well but not without casualties.

Heitinger was sent off in extra time for his second yellow card offence. Robben already on yellow should have joined him when he needlessly kicked the ball into an empty net after Webb had ruled him offside. The English referee was a bit benign on that occasion. There were frequent stoppages as Webb needed to stamp his authority on a game played in an atmosphere mixed with rage and fair play.

Sergio Ramos had his stupendous header saved by Stekelenburg in the third minute after which the Dutch managed to contain the Spaniards in their own half.

And even though the Spaniards had the better of the exchanges in the opening embers of the game, it was the Dutch who were more purposeful upfront.

Arjen Robben was played through in the 41st minute but with Casillas to beat, the Dutch midfielder somehow shot into the path of Casillas, missing what should have been the opener.

The Spaniards responded. David Villa was set by an immaculate cross from Sergio Ramos but he also shot into Heitinger from close range in the 69th minute.

It was more a competition of who will miss than who will score, as players of both teams had free headers and glorious opportunities to convert but were woeful upfront.

Carles Puyol had a free header missed and so too did Van Bronchorst for the Netherlands.

Cesc Fabregas came in for Alonso and was presented with yet another opportunity which he too fluffed.

The hope for a goal looked faint as the chances were created and missed.

In one moment of brilliance, Iniesta beat an offside trap, latched onto a Fenando Torres cross on the left wrapped his foot around the ball and fired a bullet which zoomed through the feeble fingers of Stekelenburg for the first and only goal of the game.

It was four minutes left for full time; the Spaniards held on; they defended a last gasp attack from the angry Netherlands until Webb blew his whistle which has been so busy throughout the game.

Iker Casillas lifted aloft the World Cup for the first time in Spanish history and they did so on an African soil.