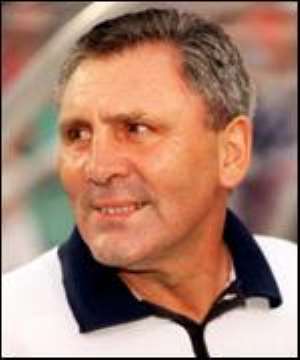 Ian Porterfielfd, the dismissed Kotoko coach, might be engaged to handle the national football team, the Black Stars, if negotiations to that effect are concretised. A reliable Porterfiled source has hinted that the coach has already made approaches to the Ghana Football Association (GFA) and the Ministry of Youth and Sports through well placed persons. Indications are that Porterfield might be considered for the job.

The coach has, for the love of Ghana, decided to stay and help the Black Stars find its feet in the qualifying series to the World Cup in the face of the unceremonious exit of the Yugoslav Milan Zivadinvic. Poerterfiled has no rigid conditions. He has offered to render his services to the national team free of charge for three months.

The only condition during the said three month-period is for the Sports authorities to provide him with accommodation and a means of transport. He would, however, go into contractual agreement with the authorities after the expiration of the three- month free service for the nation.

The Chronicle is informed that the Scot is even prepared to make further sacrifices by agreeing to the terms the Sports authorities entered into with the runaway coach Zivadinovic . It means Porterfield would not mind taking $10,000 basic as Zivadinovic's. In that case Ghana can save a total of $30,000 over the three-month period from his offer.

Porterfield would not comment but has told Chronicle enquiries that the Sports authorities have welcomed his decision but are yet to respond positively to it. If Porterfield is engaged, it would enable him to enjoy the wonderful hospitality of the people to the full, for which reason he is prepared to die a little for the country.

Chronicle has gathered that Coach Porterfield is prepared to forgo a lucrative enticement of $250,000 per annum from Korea if Ghana would take advantage of his special offer.

Coach Porterfield's assignment with Kumasi Asante Kotoko was cut short four months into the one year contract when on September 1, this year management decided to terminate his appointment. Porterfield never met with the Life Patron of Kumasi Asante Kotoko in the person of the occupant of the Golden Stool, Otumfuo Osei Tutu II, neither was he introduced to any member of the Board during his short stay with the team.

He had come into contract with two of the Board members by chance, he said. According to Porterfield, he was inspired by the Asantehene's links to the club to take up the appointment as head coach.