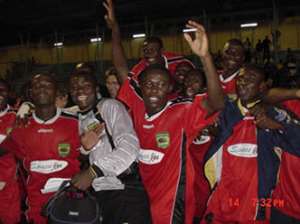 Unless a miracle happens, Kumasi Asante Kotoko have virtually booked a berth in the finals of the Cup Winners Cup competition having whitewashed A.S. Police of Congo 4-0 in the first leg semi-final match played at the Kumasi Sports Stadium on Sunday. Kotoko could have hit a cricket score but poor judgement coupled with over-anxiety robbed them of the numerous scoring chances they created. Kotoko kicked off and went straight into action but skipper Godwin Ablordey missed narrowly in the seventh minute. Two minutes later, Nana Arhin Duah fumbled when Michael Osei found him with an incisive pass but he allowed the Congolese goalkeeper Natundo Gaberin to push the ball to corner, which was wasted. Taking total command of the game with swift counter attacks, using the wings to great advantage, Kotoko moved into top gear and it came as a matter of course when Michael Osei shot his side into the lead in the eighth minute. Skipper Ablordey initiated the move from the mid-field and sent in a long pass to Arhin Duah who raced with the ball to the left and laid on a tailor measured pass for Osei to tap the ball into the net. A.S. Police fought back and came close in the 11th minute but Massanapu Bengu's scissor kick to Manzi Jose's pass went wide. In the 13th minute, Aziz Ansah initiated a move from the right flanks and found Hamza Mohammed who flipped the ball to Nana Arhin Duah after rounding off a defender for Dua to beat goalkeeper Gaberin with cheeky ease. With a well-oiled midfield, which revolved round skipper Ablordey, Stephen Oduro and Hamza Mohammed, Kotoko gave their opponents no breathing space and with speedster Osei and Arhin Duah running riot at the wings, Kotoko put the Congolese under severe pressure. So fierce was the onslaught on the Congolese that in the 25th minute, they were forced to pull out Biamombur Sylvere for Diagaya Jean, but that was not enough to stop Kotoko from raising the tally as Shilla Alhassan tapped the ball into the net in the 34th minute for the third. A.S. Police shook themselves from their slumber and earned a free-kick just outside the Kotoko penalty box in the 36th minute but wasted it while Kotoko also earned a 39th-minute free kick when Shilla Alhassan who was cutting his way into the visitor's goal area was brought down but kick was also wasted. Osei who proved a handful for the Police had a head butt with Mbani Ulrich in the 43rd-minute and had to be attention to. Back from recess, the Police put some bite into their game and earned corner kicks in the 49th and 54th minutes but wasted them as Kotoko countered swiftly with a two-man move between Arhin Duah and Osei but Dua lobbed the ball into the waiting hands of goalkeeper Gaberin. Police again pulled out Makabu Nehemia for Yoko Wells in the 55th minute and Ampiri Martial for Massanapu Bengu in the 70th minute. But this was to be their undoing, as a minute later; Shilla Alhassan put A.S. Police beyond recovery scoring Kotoko's fourth goal and his personal second from Osei's cross from the left. Nana Arhin Duah hit the cross bar with a terrific left footer in the 78th minute from Ablordey's pass. The Kotoko technical team pulled out Osei and Stephen Oduro for Kwadwo Poku and Abass Inusah in the 87th minute. The substitution nearly paid off for Kotoko as Kwadwo Poku intelligent lob over onrushing goalkeeper Gaberin's in the 89th minute was intercepted. Summary Asante Kotoko 4 AS Police of Congo 0 First half ended 3-0. Scorers: Michael Osei (10), Arhin Duah (13), Shilla Alhassan (33, 71)

In the other ACWC semi-final encounter, Wydad (Morocco) were held to a goaless draw by USM Alger (Algeria). Ghanaweb CAF Club Championship page