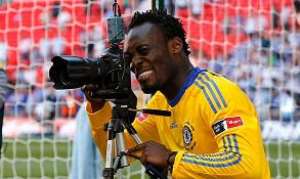 Ghana midfielder Michael Essien has hailed his young compatriots who fought to finish second at the Africa Cup of Nations this week.

The Black Stars was made up of several young players in the wake of injuries to most of the key players including Stephen Appiah, John Mensah and John Paintsil.

Ghana impressed in the African Nations Cup, getting to the final with the young squad despite Essien's absence, and narrowly losing to an experienced Egypt side.

"It was a good tournament, especially for Ghana," Essien added.

"With all the injuries and withdrawals of our experienced players, most people didn't think we will get to the final.

"However, having been with the team for a week or so, I always knew if we stuck to our game plan we would do well. We rode our luck at times and took our chances when it mattered.

"Unfortunately we came unstuck in the final against an experienced Egyptian team but Ghanaians can hold their heads up high because the boys did their best.

"You have to give Egypt credit for winning three African Cups in a row and seven in total. That is a massive achievement by any standard."