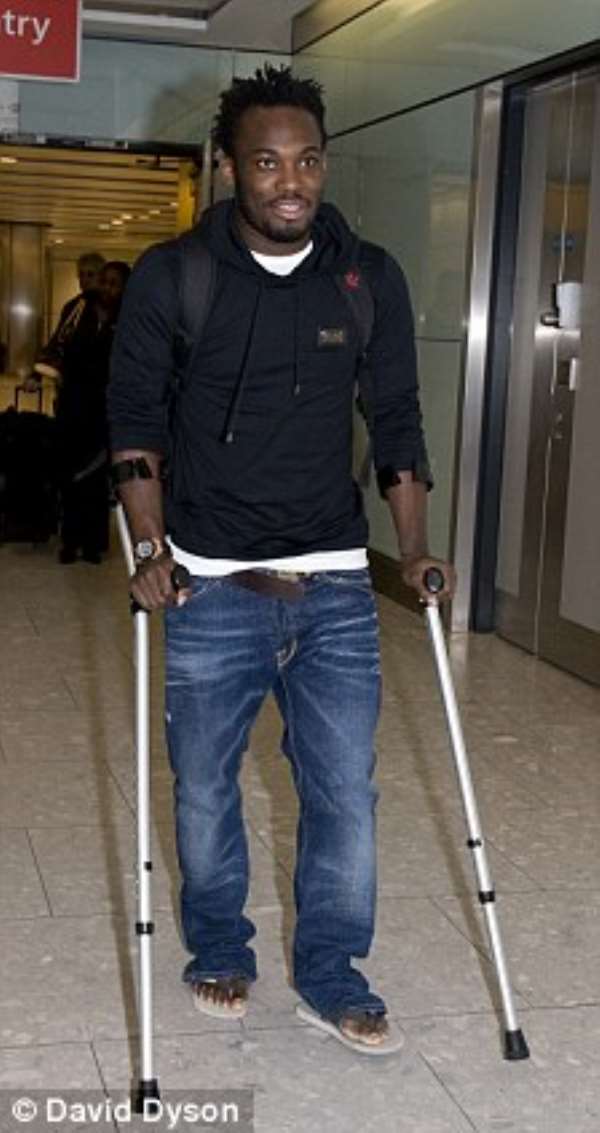 Ghana midfielder Michael Essien touched down at Heathrow airport in England on Thursday morning to undergo further tests after injury he suffered at the Africa Cup of Nations.

He suffered the injury while training with the Black Stars at the continental tournament in Angola but has been brought back to England where is club Chelsea will treat him.

Ghanasoccernet understands that he headed straight from the airport to Chelsea's Cobham training ground on Thursday where he will be further assessed.

His absence in the Black Stars team has been a blow and stayed in Luanda to watch his colleagues play Burkina Faso to qualify for the quarter finals.

Essien could be out of action for at least a month according to initial scans undertaken in Luanda, Angola.

They are understood to show that he has suffered a partially torn medial collateral ligament in his left knee and damage to his meniscus.

If his injury is as bad as first feared, then Essien is likely to miss Chelsea's Premier League clash against title rivals Arsenal at Stamford Bridge on 7 February and the opening leg of their Champions League tie against Jose Mourinho's Inter Milan on 24 February.

Essien has only just returned to training on 6 January, having not played since tearing his hamstring while on Champions League duty with his club in early December.

The midfielder watched Ghana beat 10-man Burkina Faso 1-0 on Tuesday to advance to the Africa Cup of Nations quarter-finals before returning to London.