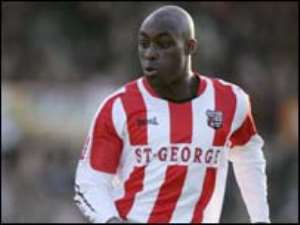 Owusu is down with swine flu Australia-based Ghanaian striker and Adelaide United recruit Lloyd Owusu has been diagnosed with swine flu.

The Ghanaian-born English striker has been in isolation since last weekend after contracting the flu either shortly after touching down in Australia or on the flight from England.

“Lloyd has got confirmed swine flu complicated by pneumonia. You can get varying side effects such as aches with the virus but Lloyd got pneumonia with it,” Adelaide club doctor James Ilic said.

“The incubation period would suggest that he either got it almost straight after arriving in Australia or on the flight from the UK, they're the two likely scenarios.

“He has been in isolation since Sunday. He's progressing well but he's still awhile away from joining the main group,” Dr Ilic added.

“It's no different from dealing with human influenza, which is relatively common. It's just a matter of him getting plenty of rest, symptomatic treatment and lots of fluid, and treatment with the anti viral drug Tamiflu.”