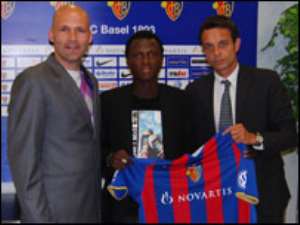 
Samuel Inkoom made his League debut in Switzerland on Sunday and says he enjoyed the experience despite ending up on the losing side for FC Basle against Saint Gallen.

The former Asante Kotoko defender was impressive in pre-season for his new club and got the nod at his favourite right back position. But there was not much joy for the defender who was cautioned on the hour mark in a 0-2 loss.

“It saddens me that we lost but I am delighted I got my first competitive game out of the way,” Inkoom told KickOffGhana.com. “With every game I adjust better to the style of play and hopefully as the weeks go by I will get better.”

Inkoom joined Basle on a four year deal from Kumasi Asante Kotoko and could make his European debut for Basle on Thursday after his League bow when they play Santa Colom in the UEFA Cup second qualifying round.