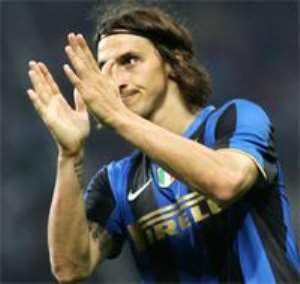 
Manchester United have been keeping their eyes on Inter ace Zlatan Ibrahimovic and are ready to make a bid after missing out on Karim Benzema, according to The Mirror.

'Ibra', who finished last season as Serie A's top goal scorer, has been surrounded by rumours claiming he will be leaving.

The report from the British tabloid claims United manager Sir Alex Ferguson is ready to make a bid of around €35 million for the Swede.

Despite reports in England, Inter director Lele Oriali claimed on Tuesday that the striker will be staying with the Nerazzurri.

Inter have regularly underlined their intention to keep Ibrahimovic, managing to keep Barcelona at bay last month, despite reports of a mega offer.

Furthermore, coach Jose Mourinho recently suggested that no player will be sold once pre-season begins, which will be tomorrow morning for Inter.

If reports in England are to be believed, Ferguson would have to offer the Nerazzurri a mega payment within the next 24 hours in order to beat Mourinho's transfer deadline.

Over the last few weeks, reports in Italy regarding the striker's future have become less frequent, suggesting he is likely to remain.