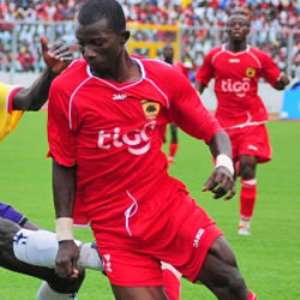 Asante Kotoko's faltering title defence was further evident after going down 0-2 at home to strugglers, Gamba All Blacks.

The defeat left the Porcupine Warriors, fourth on the standings with an 11 point gap between them and the leaders as the first round of the Glo Premier League was wrapped up in midweek.

All Blacks, third from bottom before the game at the Baba Yara Stadium jumped into the lead after 12 minutes when Obed Owusu scored the opener.

The Black Magicians finished the job before the break through Clement Coffie.

Kotoko, who leave for Morocco on Friday for the weekend's return leg of the Caf Champions League qualifier against Ittihad Khemisset will welcome the break.

Despite Kotoko's inconsistent form, leaders, Hearts of Oak were in fine form again as the Phobians managed to grind a 1-0 win Heart of Lions at the Ohene Djan Stadium.

Obed Ansah boosted Hearts' title quest when he scored the winner in the second half, his eighth of the season to give the Phobians a nine point lead into the break.

King Faisal benefited from Lions' defeat to the leaders as the Kumasi-based side leapfrog them to the second position after managing a 1-0 win over Real Tamale United at the Tamale Sports Stadium.

Tema Youth appeared too tough an opponent for Kessben FC at the Tema Park as the home team run away 4-1 winners.

Ernest Adomah's injury time goal secured the three points for Chelsea as they picked up a 1-0 win over Sekondi Hasaacas at the Sunyani Coronation Park.

All Stars kept AshantiGold amongst the bottom three after winning 1-0 at the Wa Park.

Eleven Wise shared the spoils in their 1-1 draw with Berekum Arsenals at the Sekondi Sports Stadium.

Eric Owusu scored the opener for Wise but it was cancelled out by Frank Yeboah before the break.

The final game of the match-day-15 fixture comes up at the Ohene Djan Stadium on Thursday between Sporting Mirren and Liberty Professionals.