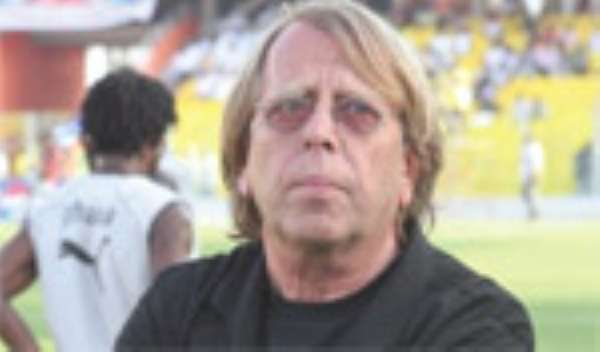 Black Stars coach, Claude Le Roy has jilted the Ghana Football Association (GFA) by refusing to accept the offer for a contract extension.

Mr. Le Roy cited personal reasons for his decision not to accept the contract offer.

According to a statement issued by the GFA yesterday, the football governing body had therefore agreed to abrogate its contract with Mr. Le Roy on 30th May 2008 instead of 30th June 2008.

The coach came under fire recently when it was alleged that he had submitted his CV to the South African Football Association (SAFA) for a coaching job following the resignation of Carlos Alberto Perreira of Brazil.

It was also alleged that the Frenchman had submitted his CV to the football authorities in Cote d'Ivoire, after the axing of German coach Uli Stielike.

Many connoisseurs saw this as a stab in the back, especially when Ghanaians had put up with the coach even though he had failed to win the 26th MTN Africa Cup of Nations on home soil.

In a radio interview recently, Le Roy admitted he was in contact with Ivory Coast over the vacant Elephants' coaching post.

This revelation sparked angry reaction from fans and club administrators in Ghana including Alhaji Grunsah- owner of King Faisal, who wanted the Frenchman to be shown the exit.

Salvos were also fired at the GFA following its unwavering backing to the Frenchman in the wake of his link to the South African job.

The critics had argued that the Frenchman might leave the Black Stars in the middle of nowhere as soon as he gets a better offer.

Even though Ghanaians are yet to get the full story on what really went down, it can be safely said that the Frenchman has let the GFA down.

Claude Le Roy was named head coach of the Black Stars in September 2006 after a the Football Association's nine-member search committee set up to scout for a new coach settled on the 60 year-old.

From a tall list of 54 coaches who applied for the job, three applicants were short listed - Cecil Jones Attuquayefio, Claude Le Roy and Phillippe Troussier. Le Roy, a former Nations Cup winner with Cameroon in 1988 came up tops ahead of the two.

His first game for the Black Stars came on October 4 when he led the team to play two international friendly games in four days in Asia against Japan and later with South Korea on October 8.

Meanwhile the GFA has begun a head-hunt for a new coach for the Black Stars instead of advertising the post.

According to Ghanasoccernet.com the new coach will be appointed within two weeks as was the case with South Africa when Carlos Alberto Parreira quit the post.

GFA boss Kwasi Nyantakyi disclosed that a successor will be appointed before Ghana plays Australia on 23rd May.

With the World Cup qualifiers starting early next month with the clash against Libya, Mr Nyantakyi noted that there is no time for an interview process as had been done in the past.

"When South Africa lost Carlos Alberto Parreira they picked who they thought could do the job," Nyantakyi said.

"We will do the same thing here. We don't have enough time to go through the advertising process."

Marcel Desailly and Ralf Zumdick are the front runners to take over from Le Roy.

Le Roy's last game in charge of Ghana will be in the African Nations Championships qualifier against Togo.