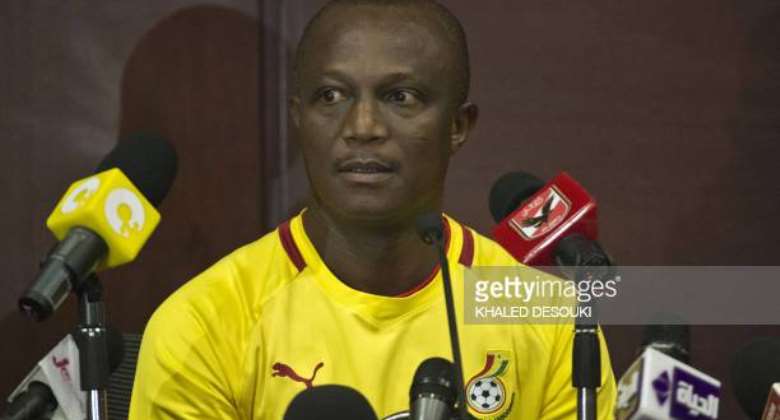 Ghanas head coach James Kwesi Appiah attends a press conference in Cairo on November 18, 2013 a day before his WC2014 African zone qualifiers football match against Egypt. Egypt will attempt to engineer a World Cup miracle by overturning a 6-1 deficit against Ghana on November 19 and snatch a spot in the finals in Brazil next year. AFP PHOTO / KHALED DESOUKI (Photo credit should read KHALED DESOUKI/AFP via Getty Images)

Kwesi Appiah has justified why he deserves to be named the head coach of the Black Stars for the third time.

The 63-year-old in his recent interview with Kumasi-based Sompa FM confirmed that he has applied for the vacant coaching role.

The national team is currently without a head coach following Otto Addo's resignation.

The Ghana Football Association [GFA] are expected to name a new head coach for the side before the playing body reassembles in March for the 2023 Africa Cup of Nations [AFCON] doubleheader clash against Angola.

Despite over 60 expatriate coaches applying for the job, Appiah, who has already had two stints with the team speaking in an interview justified why he is the right man for the job.

According to him, he introduced about 40 players to the team who are currently key players for the team.

The soft-spoken coach believed that his credentials made him the most qualified Ghanaian coach to handle the Black Stars now following his immense contribution to the team during his two previous stints.

"The last time we checked I had introduced about 40 players to the Black Stars in recent times," the Kotoko legend told Graphic Sports.

"These are the players who are carrying the team and holding aloft the Ghana flag now," he noted.

Appiah is famously remembered for leading the Black Stars to the Fifa World Cup in Brazil in 2014.