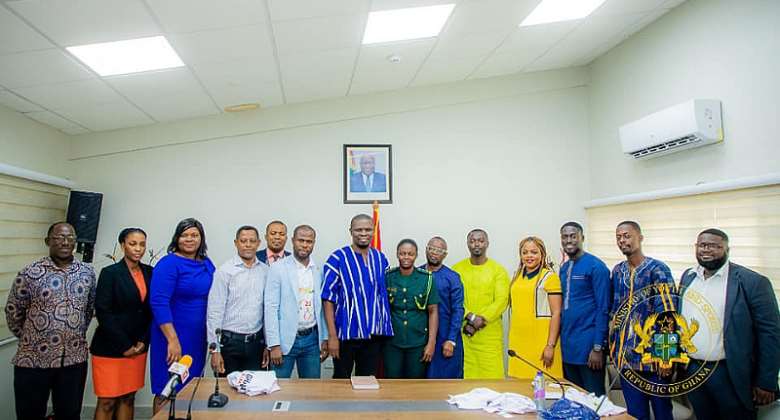 The Ghana Fencing Federation led by its president, Mr Mohammed Mahadi on Wednesday 18th January 2023paid a courtesy call on the Minister for Youth and Sports at the Ministry's conference room.

The purpose of the visit was to introduce the newly constituted Local Organising Committee (LOC) for the hosting of the Fencing cadet and Junior African Championship in Ghana dubbed "Ghana 2023" and to present the roadmap of activities for the competition which is slated to begin from the 14th to 21st February, 2023 at the Trust Emporium, Bukom.

The Minister for youth and sports, Hon. Mustapha Ussif on behalf of the Government welcomed the members of the committee to the Ministry and congratulated them for their nomination to serve on the committee.

The Minister assured them of his support towards organising the competition adding that the competition will serve as the preparatory ground to identify talents for Ghana's contingent towards the 2023 African Games.

The President of the Ghana Fencing Federation noted that the committee had begun a series of engagements to create awareness and also solicit support to make the competition a memorable one.

He further thanked the Minister for granting them the request to meet and introduce the leaders of the Federation/LOC to him and to discuss ways through which their activities could be enhanced.

He mentioned that they anticipate great support and a close working relationship with the Sports Ministry and other relevant institutions to make the organisation and hosting of the Championship a great success.