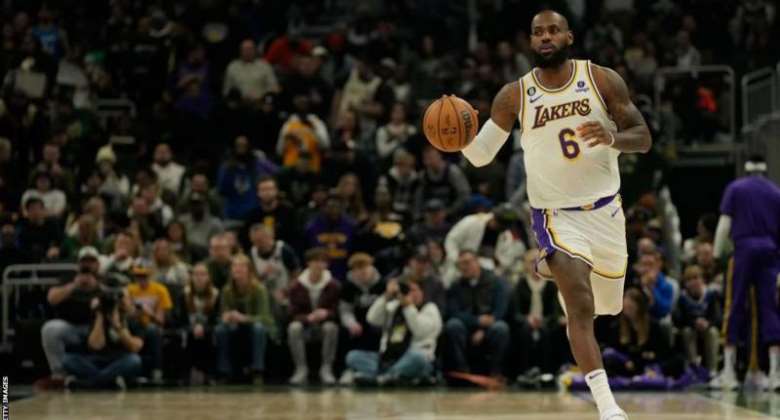 LeBron James passed Magic Johnson on the NBA's all-time assists list as the Los Angeles Lakers battled to a 133-129 win against the Milwaukee Bucks.

Former Utah Jazz point guard John Stockton, who retired in 2003, tops the list with 15,806 assists in his career.

James scored 28 points as the Lakers - led by Anthony Davis with 44 points - held off a late Bucks surge.

Giannis Antetokounmpo top scored for Milwaukee with 40 points, but his side missed key chances as Grayson Allen and Jrue Holiday both failed with three-pointers in the last seconds of the game.

In Boston, Jimmy Butler returned from a seven-game injury absence to help the Miami Heat to a 120-116 overtime victory over Eastern Conference leaders the Celtics.

Jalen Brown scored 37 points for the Celtics, including a three-pointer that forced overtime.

Tied with little more than a minute left on the clock, Butler landed a jump shot that proved the clincher, the defeat ending Boston's 10-game home winning streak.

The leaders of the Western Conference also lost as the Phoenix Suns were narrowly beaten 122-121 by the Houston Rockets.

In San Francisco, NBA champions the Golden State Warriors beat the Chicago Bulls 119-111, while the Brooklyn Nets made it four wins in succession with a 114-105 victory against the Toronto Raptors.

Let us all speak one language; we must do this together – Of...
9 minutes ago