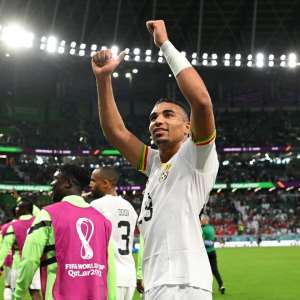 Ghana defender, Alexander Djiku has described the victory against South Korea as not just beautiful but amazing as well.

The centre-back was a second-half substitute for the Black Stars on Monday afternoon and helped the national team to fight to hold onto a narrow 3-2 win against the Group H opponent of the 2022 FIFA World Cup.

At the end of the nervy contest, a buzzing Alexander Djiku posted on his social media, “It's beautiful, it's amazing, 𝗶𝘁'𝘀 𝗚𝗵𝗮𝗻𝗮.”

In today’s game, Mohammed Kudus was a star for the Black Stars and made things happen for his country.

The Ajax attacking midfielder scored a brace for Ghana and deservedly won the Man of the Match award at the end of the 90 minutes.

His two goals came after defender Mohammed Salisu had scored from a scramble in the South Korea box in the 24th minute to give the Black Stars the lead.

After the win today, Ghana must now prepare for a tough final Group H encounter against Uruguay on Friday, December 2.