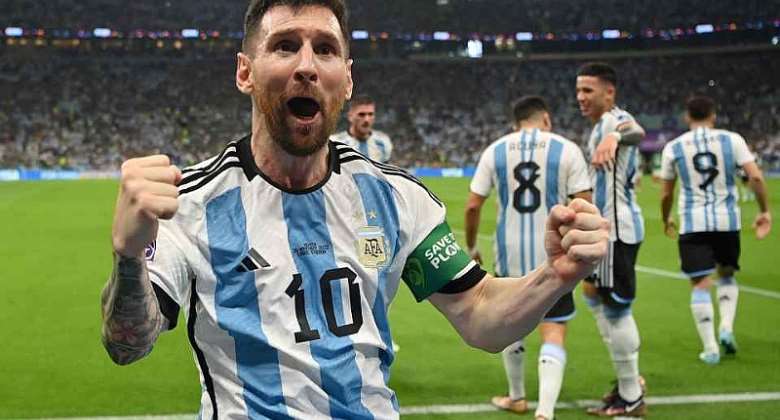 Argentina were in desperate need of a goal midway through their second group stage match of the 2022 World Cup in Qatar, when up stepped Lionel Messi.

Messi found space on the edge of Mexico's box and ripped off a low shot which beat Guillermo Ochoa to give Argentina the lead they were grasping for.

It was Messi's second goal of the tournament so far, extending his run of six consecutive Argentina appearances with at least one goal, and took his overall tally to eight World Cup goals. That puts him level with fellow Argentinian icon Diego Maradona, albeit with at least one more match to play.

Not only is Messi now level with Maradona, and second all-time for Argentina behind only Gabriel Batistuta (10 goals), he has also pulled alongside other footballing luminaries like Rivaldo, Rudi Voller and his eternal rival Cristiano Ronaldo.

After scoring the opening goal of Argentina's campaign in Qatar against Saudi Arabia, Messi appeared poised for a successful swansong in what will surely be his final World Cup. However, the Saudis staged a remarkable comeback to beat Argentina 2-1 and leave Messi's team in a desperate situation.

With their backs to the wall against Mexico, Argentina produced an unimpressive opening hour but just after the hour mark, Messi struck to lift the match and give his country hope.

Defeat against Mexico would have sealed elimination at the group stage, but Messi's goal means that Argentina live to fight another day.

The Albiceleste face Poland in their final group match, knowing that victory will assure them of progress to the next round, while a draw may be enough if the other match in the group goes their way.

Should Argentina advance, they will face one of France, Australia, Denmark or Tunisia.

France ended their World Cup hopes in 2018 with a remarkable 4-3 victory at the same stage and would likely be heavy favourites this time around again, while any of the other three Group D teams would be rank outsiders in a potential knock-out match.

Since breaking into the national team at the age of 18, Messi has been a mainstay. He has piled up 168 caps, 93 goals, Olympic gold, the 2021 Copa America title and the 2022 Finalissima, but the World Cup has thus far eluded him.

From his first World Cup in 2006, through the tournaments in South Africa, Brazil, Russia, and now Qatar, Messi has been the talismanic player for his country.

He won the player of the tournament award in 2014 after leading Argentina to the final, but was obliged to accept a runners-up medal after Germany won a tense final via Mario Gotze's extra-time goal.

From first coming to prominence in Barcelona's youth teams, Messi has been mentioned in the same breath as Maradona. It is somehow appropriate that the 34-year-old should draw level with the former World Cup winner before his career is done.