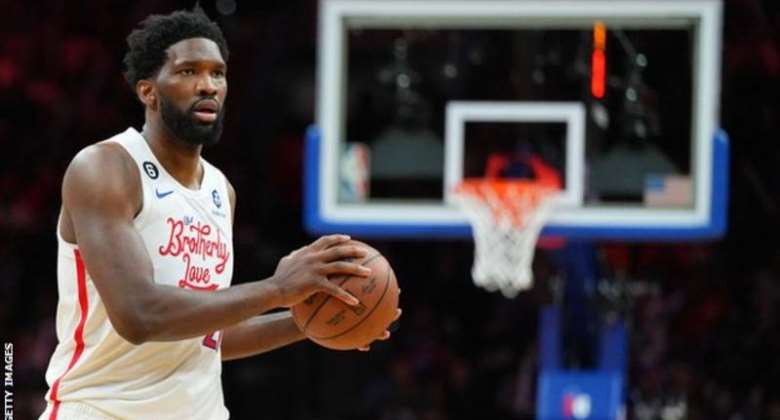 Joel Embiid scored a career-high 59 points as he led the Philadelphia 76ers to a 105-98 win over the Utah Jazz.

The 28-year-old set a season-high record for points scored in an NBA game, and also had 11 rebounds, eight assists and seven blocks.

The 76ers coach Doc Rivers said he had "never seen a more dominating performance when you combine offense and defence".

The victory was the 76ers' third in four games.

Cameroonian Embiid became the first player to record at least 50 points, 10 rebounds, five assists and five blocks in a game since blocks became an official stat in 1973.

"We did it as a team. Obviously, the coaches put me in those positions and my team-mates fed me the ball," said Embiid.

"I thought we had great spacing around everything we were doing. Like I said, all the credit goes to my team-mates."

Embiid's 59 points came after the Cleveland Cavaliers point guard Darius Garland had become the first player to hit the 50-point mark this season.

Garland, 22, scored 51 points but couldn't save his side from a 129-124 defeat by the Minnesota Timberwolves.

Elsewhere, the Los Angeles Lakers - without the injured Lebron James - beat the Brooklyn Nets 116-103 to end a five-game losing streak.