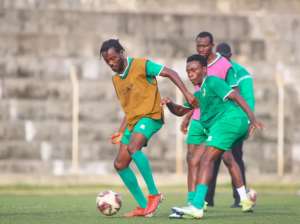 The reigning Ghana Premier League champions will face the Burkinabe side on Monday with kick-off scheduled at 15:00GMT.

They are expected to continue with their preparations today ahead of the clash on Monday, September 12.

Kotoko returned from Sudan a week ago following their poor run of results in their pre-season campaign, losing all three games against Simba SC and twice with Al Hilal.

They will clash with the Burkinabe Champions a week later in Kumasi at the Baba Yara Stadium for the return leg encounter.

Their game against newly promoted side Nsoatreman in the betPawa Ghana Premier League was postponed due to their African campaign.

We haven’t rejected Justices Gaewu and Koomson – Appointment...
25 minutes ago

Stop the wrongful, multiple sale of lands — Akufo-Addo to ch...
25 minutes ago