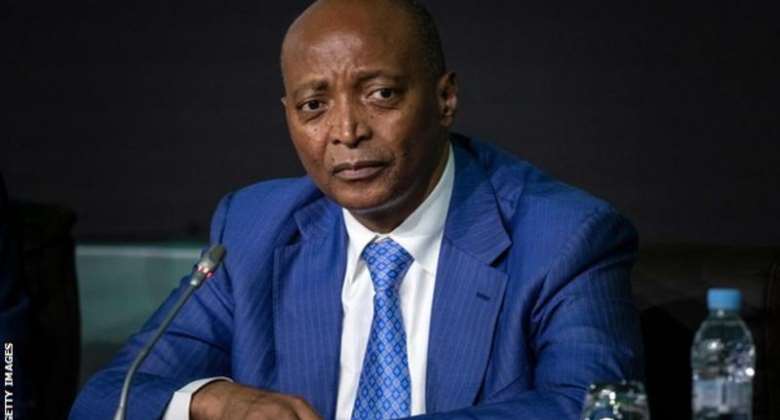 As member nations gather for this week's general assembly of the Confederation of African Football, concerns over the organisation's finances look set to be a major talking point in the Tanzanian city Arusha.

The African Super League will be launched on Wednesday, which is being promoted by Caf president Patrice Motsepe and supposed to kick-start a new era for club football in the region.

Yet with mounting losses in the continent's governing body, questions remain as to where the $200m (£165m) the new tournament is expected to generate will come from - with some fearing the new league will deplete Caf funds rather than bring in much-needed buoyancy.

Increased staff salaries and benefits - which rose by 38% to $6.6m (£5.44m) - are one reason for the reduced funds, as is the Covid pandemic, but the chief financial concern remains the loss of income from the billion-dollar Lagardere TV deal.

It is widely accepted, even by many within the confederation, that the abrupt termination of the deal - the richest contract in Caf's history - with French media group Lagardere in late 2019 is the main factor behind the current crisis.

Caf has so far struggled to find any significant alternatives to a contract which would have provided the organisation with a steady income until 2028.

The Lagardere termination was achieved under the watch of global body Fifa, who were involved in a supposed partnership with Caf at the time - a deal which ended when the African body decided against renewing it.

Nonetheless, the chilly financial winds have not prevented the often-sunny Motsepe from consistently proposing the creation of the new African Super League - which has also been pushed forward in partnership with Fifa.

According to a Caf presentation seen by the BBC, the new competition's budget will be $200m half of which will be split between the 24 participating clubs, with each team guaranteed a minimum of $2.5m (£2.06m) and the winner over four times that amount.

Each of Caf's 54 member associations would receive $1m (£0.8m) per annum, whilst $50m would be allotted to a 'Caf development fund' set aside for women's football and other competitions.

However, the document does not specify where that $200m, would come from - with no projection of sponsorship and broadcasting revenue included.

Motsepe says the plan, which involves the Super League being run in parallel with the Caf Champions League from August 2023 onwards, will transform the club game on the continent in both financial and sporting terms.

Yet it has met with opposition from those in his homeland South Africa, where the local players' union last week called the proposals both "unworkable" and "ill-conceived".

No sponsors have publicly come forward to express interest yet, and BBC Sport Africa understands that some of the main continental broadcasters who would normally bid for such a competition are reluctant to commit themselves to new deals with Caf nor to the latter's financial demands.

Motsepe has repeatedly said in recent times that private companies - whose support he is actively pursuing - have shown considerable interest in the project, which will be unveiled at 10:00 GMT on Wednesday.

If - and it is a major if - the Super League does indeed manage to generate $200m, some of the profit might have to be used to cover the compensation Lagardere are seeking for the unilateral cancellation of their deal with Caf.

Industry sources have told the BBC the French company is still seeking compensation amounting to at least $80m (£66m), a sum which far exceeds the provisions made by Caf - some $32m (£26.4m) - to cover its legal costs in its current budget.

In this harsh financial context, it has surprised many that a proposal made by Zambia's football association (Faz) to substantially reduce Caf's operational costs was taken out of the general assembly's agenda by the body's general secretary Veron Mosengo-Omba.

Caf originally included the motion in its first draft agenda, which the BBC has seen, before taking it off without explanation on 9 June, just 24 hours later.

The proposal of Faz president Andrew Kamanga had a dual objective; to ensure equal representation of Africa's six zonal unions at Caf and Fifa level, while reducing the number of Caf executive committee (ExCo) members and other attendees at ExCo meetings from 31 to 15.

The latter move would substantially lower ExCo's operational costs, estimated to be $12.5m (£10.3m) per annum at present.

Having learnt that Mosengo-Omba had not circulated their proposal to the other associations, Faz wrote to Motsepe on 25 July.

"Immediately [after] our proposal was tendered on 12 May, the general secretary requested that our proposal should be withdrawn as it was going to raise a 'political storm' among Caf members," Kamanga wrote.

The letter, which the BBC has had access to, went on to argue that it was "clear" the Caf secretariat "overstepped their mandate by excluding our proposal".

The Faz protest has been to no avail, however, with Mosengo-Omba rejecting it on technical grounds.

On 3 August, Mosengo-Omba sent a circular to all of Caf's members and zonal unions, in which he explained the Zambian motion amounted to a "proposal for amendments to Caf statutes" and, as such, required the backing of two member associations.

As no member other than Zambia had supported it, the proposal was "therefore defective and invalid", said Mosengo-Omba, who added: "Any defect or invalidity in a proposal to amend the statutes cannot be remedied or converted to a matter for discussion at the ordinary general assembly."

Mosengo-Omba's decision is unlikely to deter the continent's delegates from discussing the Zambian proposal, or the concerning financial statements they will have just received - or the continued enthusiasm for a Super League which has yet to find a public backer.

While there is no expectation of a nascent rebellion, Arusha may nonetheless be the first place where Motsepe, who has barely faced any opposition from within since he was elected president in early 2021, has to address some inconvenient questions.