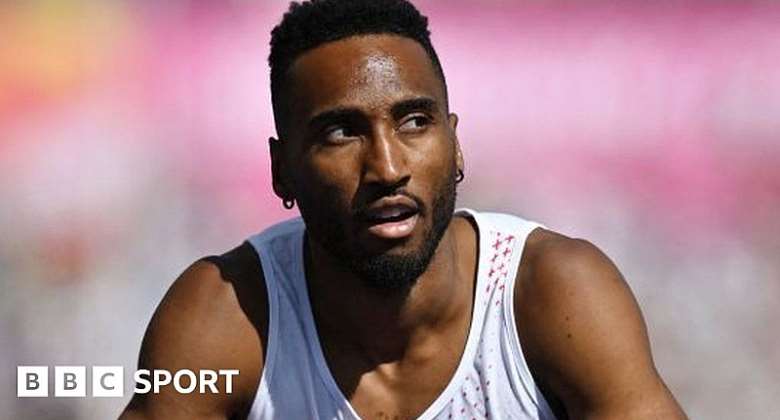 World bronze medallist Hudson-Smith entered the home straight with a decent lead, but tied up with the line beckoning.

Zambia's Samukonga did the opposite, surging up from fourth at 350m to snatch victory.

"I came away with a medal, it's not the colour I wanted," said Hudson-Smith.

"I tightened up on the home straight, so I probably could have done it a little different."

Victoria Ohuruogu, the sister of former world and Olympic champion Christine, took another silver for England in the women's race, with team-mate Jodie Williams securing bronze.

African champion Samukonga had not broken 45 seconds before arriving in Birmingham but followed his 44.89-second run personal best in Wednesday's heats with a perfectly judged 44.66 performance in the final.

The 19-year-old's elevation to a new level and a major title came at a cost.

Physically exhausted, he appeared to collapse to the track as he went to celebrate with his compatriots in the crowd. After being tended to by trackside officials, he was taken for further treatment in a wheelchair.

Hudson-Smith spent the immediate aftermath cross-legged on the track, attempting to compute what had happened.

With Bahamian Olympic champion Steven Gardiner, Grenada's Kirani James and Kenya's Emmanuel Korir all missing the final, he was the favourite to land a hometown win.

Born in Wolverhampton and raised as an athlete on this track, Hudson-Smith took it out hard.

The tactic earned him a medal last month in Eugene, but it appeared to cost him gold in Birmingham.

Hudson-Smith's stride shortened dramatically as he attempted to close out the victory, allowing Samukonga to slip through to a dramatic win.

His time of 44.81 seconds was his fifth fastest of the season so far.

After running a personal best of 50.72 seconds for silver, Ohuruogu, 29, said she was motivated to continue a family tradition set in train by sister Christine.

Beijing 2008 champion Christine, 38, has coached her younger sister since the death of Lloyd Cowan in January 2021.

"I am just so proud that our name is still on the track," said Ohuruogu.

Nothing could stop Sada Williams. Barbados' world bronze medallist strode away with the race, winning in a Commonwealth record 49.90, while England's Williams edged out fast-finishing team-mate Ama Pipi for bronze.

Her time was a new Commonwealth record, but still, some way off the jaw-dropping 12.06-second world mark she set last month.