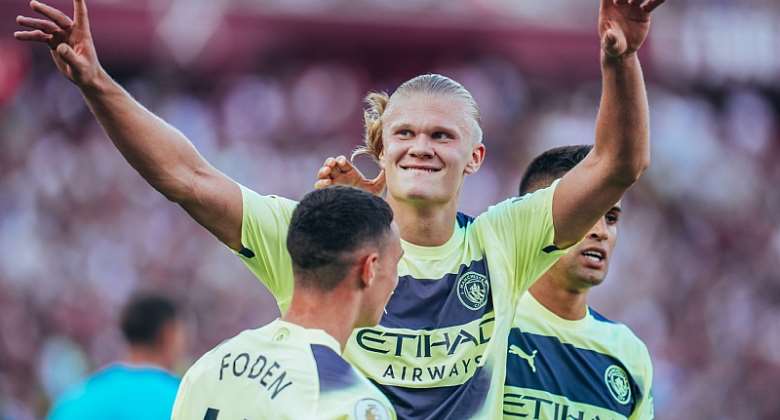 Norwegian striker, Erling Haaland is off-the-mark in the English Premier League after netting a brace for Manchester City in the team’s 2-0 win against West Ham United.

The prolific striker started for the Citizens on Sunday afternoon when the team visited the London Stadium for the matchday one encounter in the 2022/23 English Premier League season.

In a game where the Hammers chased shadows for most parts of the first half, Erling Haaland won a penalty for Manchester City in the 26th minute.

The striker accepted the responsibility from 12 yards and made no mistake as he shot the visitors into a deserved lead.

Later in the second half, the former Borussia Dortmund striker was presented with a fine opportunity in the 65th minute when he was found by a perfect pass from attacking midfielder Kelvin De Bruyne.

The forward found the back of the net to ultimately seal a delightful 2-0 win for the defending champions.

Courtesy of his top performance before he was replaced in the 78th minute, Erling Haaland earned a high rating of 7.7.

Now off-the-mark in the English Premier League, Erling Haaland has been backed to score a lot of goals for Manchester City.

From his time at Dortmund and Red Bull Salzburg, not many doubt his goal-scoring prowess.