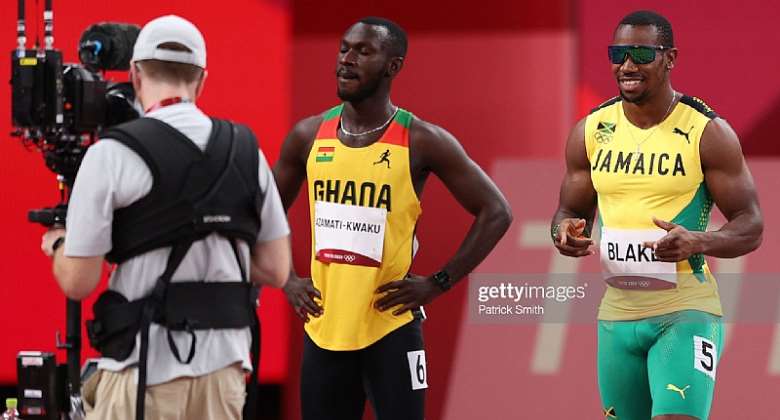 TOKYO, JAPAN - JULY 31: Benjamin Azamati-Kwaku of Team Ghana and Yohan Blake of Team Jamaica react prior to in the Men's 100m Round 1 heats on day eight of the Tokyo 2020 Olympic Games at Olympic Stadium on July 31, 2021 in Tokyo, Japan. (Photo by Patrick Smith/Getty Images)

The Chief Executive Officer [CEO] of the Ghana Athletics Association (GAA), Mr. Bawa Fuseini, Benjamin Azamati will cause an upset at the upcoming World Athletics Championships at Eugene in the United States of America from July 15 to 24.

He said the sprinter, who recently turned professional, was a sure bet for a medal at the championships.

“Azamati’s best is yet to come and I believe he will perform very well at the championships,” he told Graphic Sports.

Mr. Fuseini, also revealed that his outfit would seek sponsorship and other support for Azamati with his recent professional status.

“We are working on getting him sponsorship to support his professional career; he already has a manager so that’s also good news for us,” he noted.

The 24-year-old 100 and 200m runner is expected to feature prominently in the upcoming competition with other notable Ghanaian athletes.

Mr. Fuseini gave an assurance that his outfit would monitor Azamati and support him in all his endeavors.