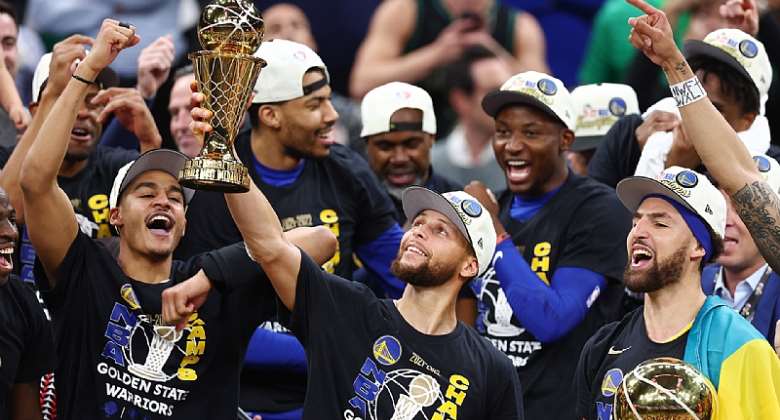 After Golden State's latest championship win, coach Steve Kerr spelled out just how important Stephen Curry has been to the Warriors' NBA dynasty.

The American point guard was already assured of being a future Hall of Famer, but this year's NBA Finals have seen him go to another level.

When Curry helped the Warriors beat the Boston Celtics on Thursday, he didn't just secure a fourth NBA title in eight years for both himself and his team, he also scored 34 points to ensure that he was named the Finals' most valuable player for the first time in his glittering career.

Kerr called it the 34-year-old's "crowning achievement" while Andre Iguodala said his team-mate had "solidified himself as the greatest point guard of all time".

And it all comes just two years after many had written off both Curry and the San Francisco franchise.

But Klay Thompson suffered a torn ACL in the 2019 series, two-time Finals MVP Kevin Durant left that summer and then, in October, Curry broke a bone in his left hand which required surgery.

With Thompson and Curry out during 2019-20, the Warriors finished with a record of 15-50, the worst in the league, as they rebuilt their squad.

After missing the play-offs again in 2020-21, a fit-again Curry warned "you don't want to see us next year" and as the final buzzer sounded in Thursday's title-clinching win, Curry cried as he embraced his father, former NBA player Dell.

"This championship hits different," said Curry junior. "It was overwhelming, surreal, because you know how much you went through to get back to this stage.

"From injuries to a changing of the guard and the roster, young guys coming through, we carried the belief that we could get back and win, even if it didn't make sense to anybody when we said it.

"When we started this season we had a lot of conversations about who we were as a team and what we're capable of. You carry all of that on a daily basis to try to realise a dream and we did it."

Curry had already twice been named the NBA's regular season MVP - in 2015 and 2016 - but this season he became the league's all-time leader for three-pointers scored.

A two-time scoring leader, he became an NBA All-Star for the eighth time this season and was named the All-Star game's MVP for the first time after scoring a game-high 50 points as Team LeBron beat Team Durant.

With his former team-mate Durant now at the Brooklyn Nets, Curry led the new-look Warriors through the play-offs, winning the Western Conference finals MVP award as they beat the Dallas Mavericks to become the first team since the Michael Jordan-led Chicago Bulls in the 1990s to reach the Finals six times in eight years.

Then came the Finals and after averaging 31.2 points across the six games Curry was named the series MVP.

"Some bozos saying he needed that," Thompson said. "He's pretty much established what he can do, but to see him earn that, he's one of the greatest ever and we all follow his lead. He was incredible, what a series."

Draymond Green, who along with Curry, Thompson and Iguodala has played in all four of Golden State's recent title wins, added: "It's been a long time coming but he left no doubt. He carried us."

Despite standing at 6ft 2in, Curry's accuracy from beyond the arc has transformed the game, with players in every position now expected to be able to shoot - and guard against - three pointers.

"You've never seen a guy his size dominate the league like this, to put the weight of everything on his shoulders through a finals series," said Iguodala.

"Normally you get a guy that's a centre like Hakeem [Olajuwon] or Shaq [O'Neal], or Michael Jordan, Kobe Bryant or LeBron James - those guys are 6ft 6in or taller, they can shoot over guys. But a guy of [Curry's] height. We all saw what he did to [Boston], it was just incredible.

"Because we're so close to those generational talents, you don't appreciate them as much. When he's gone we're really going to miss him and forget how much of an impact he had, not just on the Warriors and the NBA but the entire globe. He made the world move."

Curry, who last summer extended his contract to 2026, is not just in the conversation for being the best player of his generation, his name is now beside some of the all-time greats.

He is only the seventh player to win at least four championships and two regular-season MVPs, after Kareem Abdul-Jabbar, Tim Duncan, LeBron James, Magic Johnson, Michael Jordan and Bill Russell.

He is only the sixth to also win a Finals MVP with Russell having missed out on that honour, although the trophy is now named after the record 11-time NBA champion.

After Abdul-Jabbar, Jordan and Wilt Chamberlain, Curry is only the fourth player to win at least two league MVPs, two scoring titles and one Finals MVP. Only Jordan has averaged more points in title-clinching games.

But Curry is the only player in NBA history to win three MVP awards in the same season and with the Conference Finals MVP award being inaugurated this season, he is the first to win all of the NBA's MVP trophies.

He has enjoyed proving people wrong too. After Thursday's 103-90 win in Boston, he referenced the TV pundits "putting up the big zero" last summer when discussing how many more NBA titles he would win.

Curry also had the last laugh after Boston fans poked fun at his wife, a TV chef and restaurant owner, by wearing t-shirts reading 'Ayesha Curry Can't Cook'. Her husband was pictured in the locker room holding one of the t-shirts, along with his Finals MVP trophy.

Bawku Conflict : NMC cautions against "weaponization" of med...
38 minutes ago