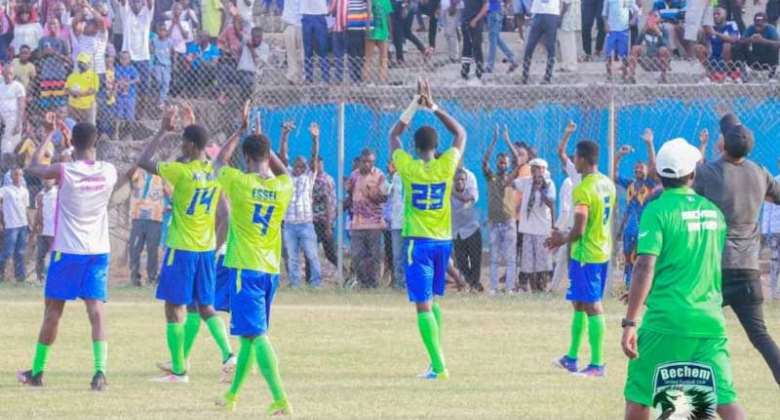 Bechem United will play in this season’s MTN FA Cup final after seeing off Aduana Stars with a deserved 2-0 win on Sunday afternoon.

The team nicknamed the hunters have been fantastic all season and now stand the chance to finish the 2021/22 campaign with two trophies.

Continuing what has been a good performance in the league this season, Bechem United played some impressive football today to secure an important victory.

On the matchday, two first-half goals from Emmanuel Avornyo and star attacker Augustine Okrah did the trick for the side as Aduana Stars bowed out of the domestic cup competition.

Watch highlights of the game below:

The victory today sends Bechem United to the finals of this season’s MTN FA Cup where the team is scheduled to face off with defending champions Accra Hearts of Oak.

That mouth-watering fixture will be played at the Baba Yara Sports Stadium in June.

Hottest Photo Reports
Catch up with all the political quotes from our politicians.
Advertise here
More from Football News
ModernGhana Links
Serie A appoint first female ref for next season
I can't work with autocratic people - W.O Tandoh slams Hearts of Oak leadership after resigning from his role
Chelsea set to hire Tom Glick as new executive
TOP STORIES