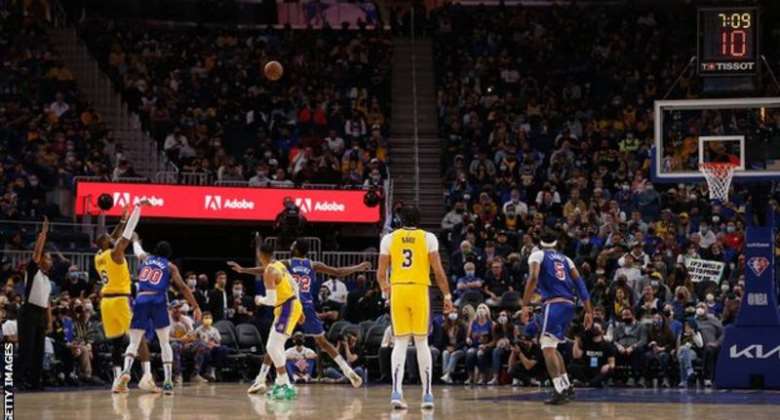 However, James missed a last-second free throw that would have won the game for the Lakers in San Francisco.

Klay Thompson scored a season-high 33 points for the Warriors.

"In all my career, any time I've been linked with some of the greats, I've always just been in awe," said 37-year-old James, who has scored at least 25 points in his past 22 games.

The Brooklyn Nets suffered an 11th successive defeat as they lost 115-111 to the Miami Heat.

Bam Adebayo scored 19 points and made 14 rebounds for Miami, who have the best home record in the Eastern Conference.

Nikola Jokic scored 28 points and made a game-saving block on OG Anunoby in the final second as the Denver Nuggets edged the Toronto Raptors 110-109.

Pascal Siakam scored 35 points for the Raptors, who saw their eight-game winning streak come to an end.

Joel Embiid's fine form continued with 40 points, 14 rebounds and 10 assists to help the Philadelphia 76ers beat the Cleveland Cavaliers 103-93. It was the 23rd consecutive game in which Embiid has scored least 25 points.

The Portland Trail Blazers clawed back a 23-point deficit to defeat the New York Knicks 112-103. Anfernee Simons top-scored with 30 points for Portland, while Josh Hart added 23 on his debut.

Ja Morant scored 26 as the Memphis Grizzlies beat the Charlotte Hornets 125-118 for their fifth win in a row, while the San Antonio Spurs overcame the New Orleans Pelicans 124-114 and the Phoenix Suns thrashed the Orlando Magic 132-105.

The Chicago Bulls saw off the Oklahoma City Thunder 106-101, while the Los Angeles Clippers edged out the Dallas Mavericks 99-97 and the Sacramento Kings beat the Washington Wizards 123-110.