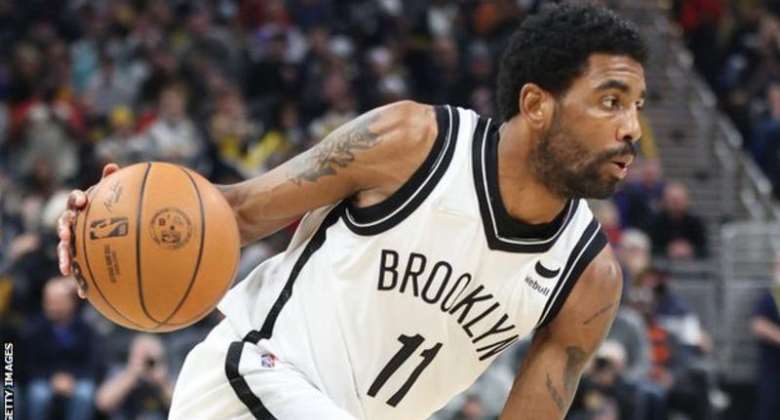 Kyrie Irving will not change his mind and get vaccinated against Covid-19 despite an injury to fellow Brooklyn Nets player Kevin Durant.

A knee ligament injury has sidelined Durant for a month or more, weakening the Nets' star-studded squad.

"I stay rooted in my decision. It's not going to be swayed just because of one thing in this NBA life," said Irving.

"I live my life, the majority of the time, when I'm away from this.

"So when I say I'm not getting vaccinated and I'm making a choice with my life, somehow it gets mixed into, 'well, what about the basketball?' When it's like, 'no, bro - we live in a real world'.

"I love playing on the Nets, but I've been away enough time to think about this, to process it, to be able to make this decision, stand strong, understand that people are gonna agree and some people are gonna disagree."

Irving, a seven-time All Star, also cannot play in the Nets' away matches against local rivals the New York Knicks or the Toronto Raptors.

He admits to being a "big conspiracy theorist" and apologised in 2018 for suggesting the earth may be flat.

His arrival alongside Durant in 2019, since supplemented by the signing of star shooting guard James Harden in 2021, was intended to propel the Nets to be championship contenders.

However, last year's Conference semi-final loss to eventual champions the Milwaukee Bucks is the furthest they have gone in the end-of-season finale during Irving's time at the franchise.

Last year Booker scored 601 points in the NBA play-offs, the most ever by a player making their first post-season appearance

LeBron James scored 25 points as the Los Angeles Lakers broke a three-game losing streak with a 101-95 success against the Utah Jazz.

The Milwaukee Bucks came unstuck as the Atlanta Hawks, who had lost their past five games, came from 11 points down early in the final quarter to win 121-114