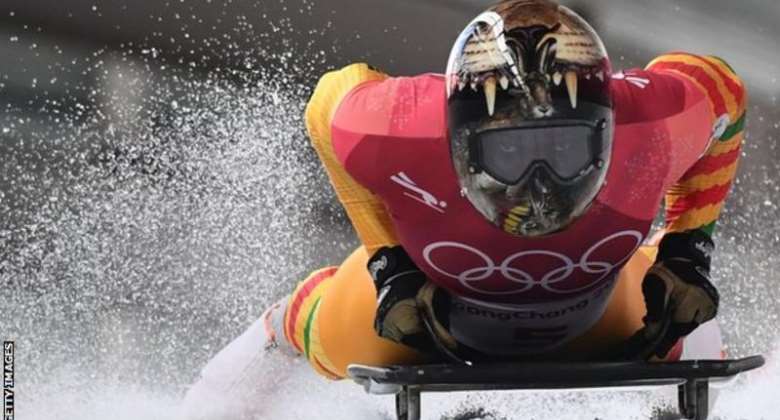 Ghanaian skeleton bob racer Akwasi Frimpong says he is "broken" after a positive coronavirus test effectively ended his hopes of qualifying for the 2022 Winter Olympics.

The 35-year-old, who finished 30th on his Olympic debut in Pyeongchang in 2018, revealed he was isolating with mild symptoms after testing positive last week.

"It's painful not being able to fulfil my dreams, with all the time, energy, money and things I've sacrificed," he told BBC Sport Africa.

"The timing is not good. If I had a competition two weeks later maybe I'd still be feeling weak but have a chance to slide."

Frimpong, who is fully vaccinated, is set to miss this week's two Intercontinental Cup events in Altenberg and the World Cup in Winterberg.

He still requires points to have a chance of competing at Beijing 2022, with the Games beginning on 4 February.

"I have always been a positive person but this is out of my control," he said. "This was my last shot.

"For my hopes to be able to test negative, there has to be a lot of magic. The most important thing now is trying to get healthy."

Utah-based Frimpong, a former sprinter who also has Dutch nationality, is frustrated he will not get the chance to race in China and inspire future generations to take up winter sports.

"You want to compete with the best in the world, show what you are capable of and leave a legacy behind that is inspiring and motivating," he said.

"Other Africans around the world would be able to have an example and know 'if he can do it, I can do it'.

"I was really hoping to finish the job I have started and go to Beijing 2022, especially as I am way much more competitive than I was four years ago.

"If I was going to go to Beijing, I had a shot to be able to be in the final. That is another legacy I wanted to leave behind.

"I don't come from a winter sport background, and it's an uphill battle for me financially to get the support I need to compete with the best in the world. I still pushed through and worked hard to put the hope of people on my shoulders and never gave up."