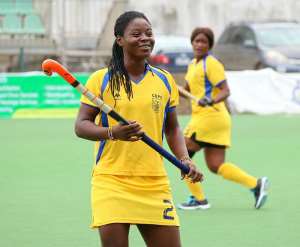 Meet Mavis Boatemaa Berko the hockey player who won the female best player award during the African Cup for club championship that was played from 24th to 30th November.

She scored goals in the tournament. In the first match here club Ghana Revenue Authority (GRA) had a walkover so they were given three goals, three points.

She is one of the most consistent hockey stars in Ghana.