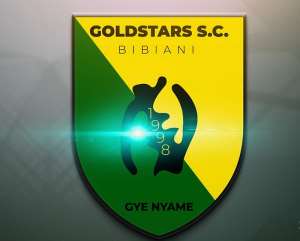 Chief Executive Officer [CEO] for Bibiani Gold Stars, John Kwasi Adu has expressed his excitement after a new team bus was donated to the club.

The club will be competing in the upcoming 2021/22 Ghana Premier League season.

With the new season scheduled to kick off this weekend, Chirano Mines have donated a 33-seater bus to the club.

The new bus is to help the club with its travels for games across the various league centres.

John Kwasi Adu could not hide his excitement after receiving the bus on behalf of the team.

“This is a lovely gesture we have received from Chirano Gold Mines. Getting a bus like this is a dream come true for us," he told Citi Sports.

"We hope that with this bus we will be able to perform well on the pitch and transform the football culture in the Western North Region.

"Gold Stars have come in a grand style and hopefully, we will stay in the league for years,” he added.

The Bibiani-based club secured qualification to the premier league, topping Zone Two of the Division One League.

Bibiani Gold Stars will host Berekum Chelsea at the Dun’s Park on Sunday, October 31, 2021, in the matchday one of the Ghana Premier League.