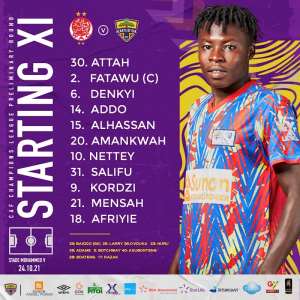 Hearts of Oak head coach, Samuel Boadu has named a strong starting lineup to do battle for his team in the tough meeting against Wydad AC in the CAF Champions League this evening.

The Ghanaian champions despite holding a 1-0 advantage from the first leg of the tie go into tonight’s encounter as the underdogs.

Playing away from home, the stakes have declined further especially with this being the first experience for head coach Samuel Boadu.

Accepting the challenge of the elite African inter-club competition, the gaffer of the Phobians has named a potent starting eleven that can upset the fancied side of Wydad AC.

This evening, highly-rated goalkeeper Richard Attah is named in post and will have protection from a back four that has Robert Addo Sowah and Mohammed Alhassan paired as the center backs.

Caleb Amankwah has been tasked to provide a shield for the backline while Emmanuel Nettey and Salifu Ibrahim form a solid partnership in midfield.

In attack, Daniel Afriyie Barnieh and Kofi Kordzi have been selected and will be expected to push to get a goal for the visitors.

Below is the Hearts of Oak first eleven for the Wydad encounter.