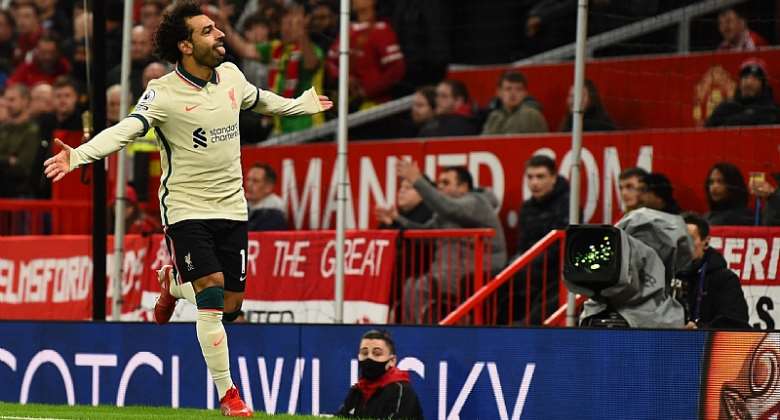 Egyptian star, Mohammed Salah bagged a sensational hatrick on Sunday evening to power Liverpool to run riot over poor Manchester United in the English Premier League with a deserved 5-0 win.

The two rival clubs today locked horns at the Old Trafford to battle for points on matchday 9 of the ongoing 2021/2022 English top-flight league.

Although Liverpool visited the grounds as favourites, the expectations was to have a closely contest encounter.

However, with Manchester United putting up a disappointing performance right from the start of the game, Jurgen Klopp’s side took advantage to give the home team a battering to remember throughout the season and beyond.

On the matchday, Mohammed Salah starred with his attacking play as he continued his fine form in Europe.

The Egyptian scored twice in the 38th and in added time of the first half respectively to give Liverpool a 4-0 lead to take into the break.

Five minutes into the second half, the attacker who is in red-hot form sealed a delightful hat-trick when he netted his third of the evening with a fine effort.

With his performance today, Mohammed Salah is going home with the match ball, and a near-perfect rating of 9.9 as demonstrated in the statistics provided by SofaScore below:

In today’s clash, Mohammed Salah set up Naby Keita to open the scoring for Liverpool in the 5th minute of the first half.

Eight minutes later, Diogo Jota equalized with a sliding finish to increase the lead for the big winners as the team eventually destroyed Manchester United with a 5-0 win to go second on the English Premier League table.