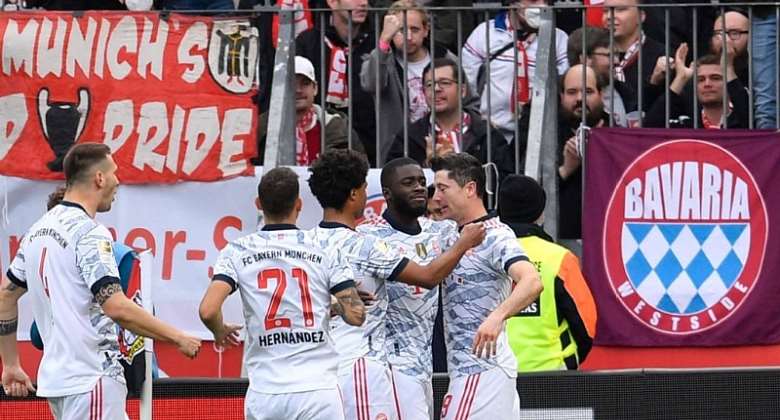 Bayern Munich returned to the top of the Bundesliga after blowing Bayer Leverkusen away with five first-half goals.

Coming into this game both teams had almost identical records, with only goal difference separating the division's two highest scorers in second and third. Both managers knew a win would take their side to the summit of the league.

And it was the visitors who struck first. Robert Lewandowski ended his longest goal drought since November to break the deadlock after four minutes with a sublime aerial backheel inside the box courtesy of a perfectly weighted Dayot Upamecano cross.

On the half-hour mark, Lewandowski took his goal tally to nine for the season with a composed finish inside the box, completing a Bayern move that started at the back and cut through the Leverkusen team with pace and precision.

The floodgates then opened as within five minutes the visitors added three more goals. First Thomas Muller deflected the ball past Lukas Hradecky from a corner. Then Serge Gnabry grabbed a quickfire double as his pace and clinical finishing skills proved too much for the Leverkusen defence.

The second half saw both managers make a collection of changes, no doubt conscious of their European commitments next week.

Bayer Leverkusen got a consolation goal on 55 minutes when Patrik Schick latched on to a Florian Wirtz through ball. The Czech showed his strength and eye for goal as he slotted the ball past Manuel Neuer.

As the match wore on there was a clear drop off in intensity as the game was well and truly put to bed in the first half.

Next up for Bayer is a trip to Spain as they continue their Europa League journey against Real Betis before returning to league action against Koln. While Bayern take on Benfica in the Champions League and then host Hoffenheim.