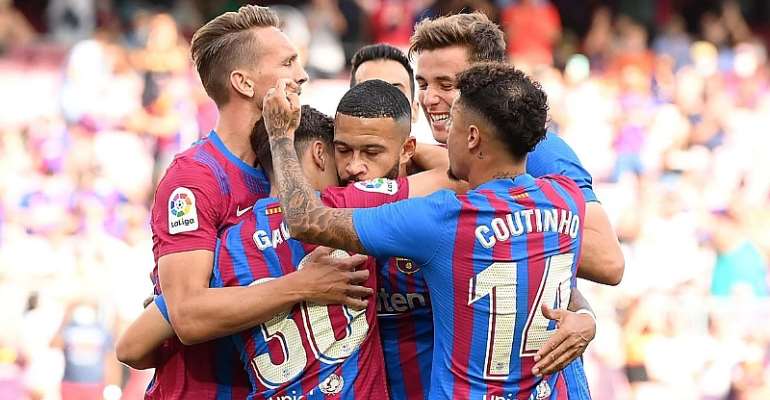 Barcelona produced a fine display as they put their off-field woes behind them to beat Levante 3-0 at the Camp Nou.

The Catalans were without Ronald Koeman after he was suspended after his sending off against Cadiz but led by Memphis Depay and supported by young gems Nico Gonzalez and Gavi in midfield, it was all too easy for Barca as goals from Depay himself and his compatriot Luuk de Jong sealed the three points.

Depay would torment Jorge Miramon at right-back for Levante; supported ably by stand-in left-back Sergino Dest, with the American a constant threat on the overlap with his directness and willingness to adapt to the attacking scenario and underlap onto his stronger right foot when needed.

It would be the case for Barca's opener on six minutes - Dest the decoy over-lapper, Depay cutting infield, weaving inside with wonderful footwork, felled for a penalty which he aptly converted.

Dest would turn provider for the second just eight minutes later, exploiting the space left infield by the visiting midfield block, and the former Ajax man had the awareness to drive onwards, before sliding a great ball through for de Jong to finish with aplomb.

Aitor Fernandez was on hot form for Paco Lopez's side, who found their goal peppered heavily by shot volume - predominantly from Depay - but Barcelona would continue to batter on the door in search of a third as Levante looked dead and buried from the offset.

Ansu Fati made his long-anticipated return off the substitutes' bench with 10 minutes to go, with a rousing ovation from the Camp Nou crowd, and he wrote himself back into the headlines after a very difficult 10 months out with a fantastic finish late on to make it 3-0.

Barcelona proved that, despite being ravaged by injuries, their shoestring squad will still mean business this season.