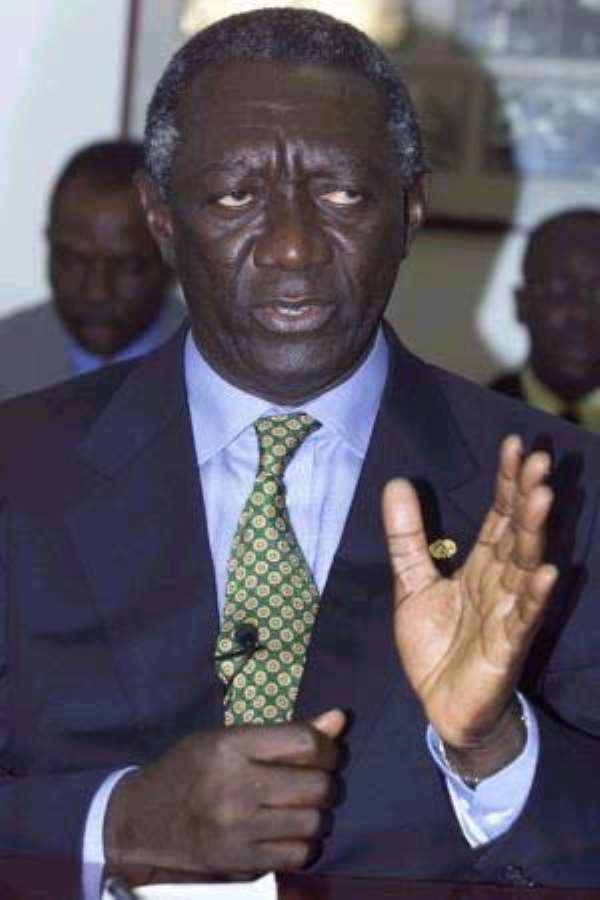 President J.A. Kufuor's visit to the Accra Race Course last Saturday, the first, since he assumed office as Head of State lifted the spirits of horse-racing lovers and boosted his own spirit, as a horse with the name "Asie ho" won one of the day's opening races. "Asie ho" was the highly effective slogan adopted by his party, the New Patriotic Party (NPP) in Election 2000, the elections that brought him to power. The Accra Race Course has suffered much neglect and most of its site was taken over in 1990 for the construction of the International Conference Centre to host the Non Aligned Movement (NAM) Ministerial Conference. The rest of the place was zoned for a luxury Hotel and horse racing, as a national sport has been much devalued after that. The President's personal appearance at the race course was therefore his own way of telling lovers of the sport that "Positive Change" would be looking their way too. With the victory of "Asie ho" still fresh in his mind, he assured members of the Turf Club that he would give them a fair hearing when they presented their grievances about the acquisition of the course for the construction of a 5-star hotel. The event was the President's Cup race, which was billed for the fourth encounter of the afternoon after the race which "Asie ho" won. For many years, the course offered entertainment to horse racing fans in Accra until the excessive paranoia of the PNDC days when it was rumoured that some personnel of the Medium Mortar Regiment planned to place their guns at the site to fire at the Osu Castle and attempt to overthrow the government of the PNDC. Races were immediately stopped, for many years. It after this that a large chunk of the course was carved out for the construction of the International Conference Centre for NAM. The owners of the course since the 1920s, the Accra Turf Club, have watched and whined helplessly ever since. Their sorrow was aggravated when the former Vice President, Professor Evans Atta Mills cut the sod to signal the commencement of the construction of the 5-star hotel at the site. With all that, the owners had not been offered any soothing talk about compensation. Rumour has it that the former Saudi Oil Minister, Sheikh Yamani has finalised arrangements to construct Africa's largest hotel on the site, which would no doubt make the place one of the hottest properties in town. When President Kufuor honoured the invitation to the Turf Club, which can boast of hosting the Prince of Wales in 1925 and Queen Elizabeth II in 1960, the Board of Stewards asked what was in store for them in terms of compensation. The president assured them that his government would compensate those whose lands are taken over by the state. The Sheikh Yamani name works wonders and opens many doors in the international business community and if his interest is confirmed, which an insider said is as good as confirmed, then it could attract investment in the region of ¢5 billion.