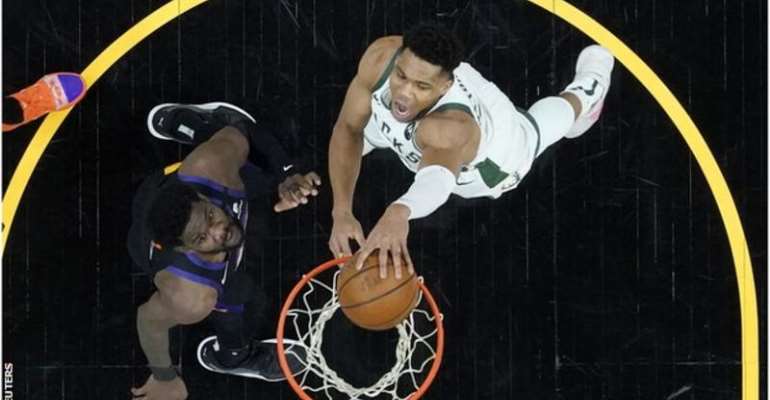 Giannis Antetokounmpo scored a game-high 42 points but his Milwaukee Bucks trail 2-0 in the NBA Finals after losing 118-108 to the Phoenix Suns.

Antetokounmpo, the NBA's most valuable player of the past two seasons, has overcome a knee injury to play in the finals and added 12 rebounds.

Milwaukee hosts game three of the best-of-seven series at 01:00 BST on Monday.

Suns coach Monty Williams was quick to praise Booker for his contribution over the opening two games.

"Devin wants to prove to everybody he's one of the best players in the league," Williams said.

"Not just from a stats perspective. He wants to prove it by winning and being competitive.

"He wants to separate himself from everyone else, to show that he can lead a team to win, and he's getting the chance to do it on the big stage."

The Suns are looking to win the title for the first time in their 53-year history and Booker says there is still a long way to go.

"It's a 0-0 mindset for us going into game three," the 24-year-old said. "We're locked in but we understand that's a really good team over there.

"We know it gets rowdy in Milwaukee but I think we're ready for it."